Understanding GI Distress in Triathlons—and How to Prevent It 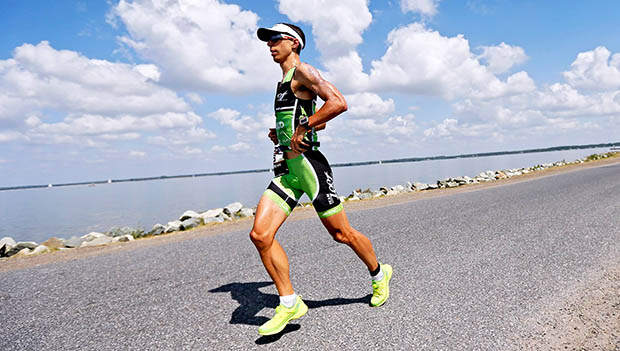 Editor's note: This article is courtesy of UCAN. Check out the information at the bottom of the page for more details on what makes UCAN nutrition products unique, as well as an exclusive offer for ACTIVE readers.

That's what I said to myself at 7 miles into the run leg at Kona, my fourth IRONMAN triathlon. I was three bottles of sugary sports drink down and six gels deep. The first gel went down easily, but even the thought of something sugary was making me sick, and I'd already stopped at two porta-potties on the run. "What do I do!?" I couldn't stop taking in fuel or I'd bonk and join the IRONMAN death march. But I couldn't take in any more nutrition because my stomach hurt and it'd probably just come back up anyway.

Sound familiar? This all-too-common dilemma is experienced by somewhere between 30 and 90 percent of triathletes (depending on the study's methodology) during their races, and often during longer training sessions. But the good news is that GI (gastrointestinal) distress can be a thing of the past.

After three years in the sport, I had tried nearly every sports nutrition product out there and failed to meet my potential at my first four IRONMANs due to nutritional issues. I was fed up, so I reached out to a sports nutritionist in 2014, hoping to get these issues nailed down for good. She worked with me on daily diet adjustments, a different carb source and designed a new race nutrition plan for me. Three months later I put my new nutrition plan to the test at IRONMAN Maryland, and for the first time ever in an Iron-distance event, I had zero GI distress and zero bonking issues. I was able to run strong the whole way, like I knew I could: 20 minutes faster than I ever had off the bike, running 3:00. I had a 51-minute PR for a total time of 8 hours 51 minutes, and I won the race.

I never thought I would have the chance to win an IRONMAN, but thanks in part to avoiding GI distress, that amazing day was made possible.

When I had this nutritional breakthrough, I was not aware why it worked, simply that it did. I wondered if it was just in my head or maybe that I got lucky, but over the coming months and experiencing several more GI distress-free races, I came to understand the science behind the issue. Let's explore some of what we know about GI distress, and why it happens.

Blood flow to the stomach is impaired during exercise.

During exercise, our body directs blood flow to the working muscles, so less blood flow is directed to the stomach. "With reduced blood flow, your stomach struggles to digest what you are eating," Olympic Dietitian Bob Seebohar says. "Needing to eat 300-plus calories per hour of simple sugar or maltodextrin-based products is at odds with your body's ability to actually absorb them."

Osmolality relates to how quickly a fluid will clear the stomach. Most sports drinks and gels are composed of simple sugars (e.g. fructose, glucose) and/or maltodextrin, all of which have fairly high osmolality. "High osmolality means that there are lots and lots of small molecules in a given space, and each one of them needs to be transported (by water molecules) through the stomach barrier and into the gut," Seebohar says. "Since this process takes time and requires lots of water, it means fluids can slosh around in the stomach for a while, potentially causing problems." A solution that has lower osmolality will clear the stomach quickly, thereby mitigating or even eliminating sloshing, stomachaches and bloating.

Since sugary carbohydrates require water molecules to transport them through the stomach barrier, it makes sense that being dehydrated can contribute to GI distress. Without enough water, you have a hypertonic solution in your stomach, and your body will actually draw water from elsewhere (through reverse osmosis) so that it has the water necessary to transport those carbohydrate molecules through the stomach barrier. Drawing water from other parts of your body, in turn, leads to further dehydration, which leads to further GI distress, and so on. This is why GI distress is even more common at hot IRONMAN races like the World Championship, reaching prevalence rates of as high as 93 percent.

Typical heart rates while running are about five to 10 beats higher than while cycling. Also, all sorts of jostling is occurring while running, when dehydration has already set in and when many athletes have already consumed large quantities of sugary nutrition to that point. Those are four reasons why GI distress often rears its ugly head during the run leg of a triathlon. One way to combat that is to "front-load" your nutrition by taking more during the bike leg than during the run, but that only works if what you are consuming releases its energy over a long period of time, and only if it doesn't give you GI distress while still on the bike.

Finding a nutritional solution that addresses these points is the key to becoming what one might call "GI Blissed"—when one no longer has to worry about GI issues, your triathlon becomes a blissful experience. Imagine not having to go to the bathroom at the most inopportune times. Imagine never having pain in your stomach during a 9 to 15 hour period of intense physical activity, when you previously knew it was coming, always dreading just when that moment would be. What a monumental change, and what an extraordinary feeling, to not have that worry.

While I can't promise you will win an IRONMAN by heeding this advice, you are now armed with the knowledge of why GI distress happens, and what to think about to prevent it. So go forth and conquer your goals, whatever they may be.

READ THIS NEXT: How to Troubleshoot GI Issues

This article is brought to you in collaboration with UCAN, the nutrition company with the go-to nutritional solution used by over 400 pro and college teams, Olympians and triathletes, cyclists and athletes of all levels across many sports to keep their energy and their stomachs steady.

Want to try a unique nutritional solution designed to eliminate GI distress? We have worked out a terrific deal for you to try any of UCAN's products, which contain their proprietary, patented, natural carbohydrate—UCAN SuperStarch. UCAN offers energy powders, protein with added energy, hydration and bars.

Visit ucan.co to learn more about UCAN SuperStarch and its really cool origin story (it was developed originally to keep children with a very rare blood sugar disease alive!), and use the code ACTIVE at checkout to save 20% on your first purchase of any of UCAN's products (expires 10/31/2020).