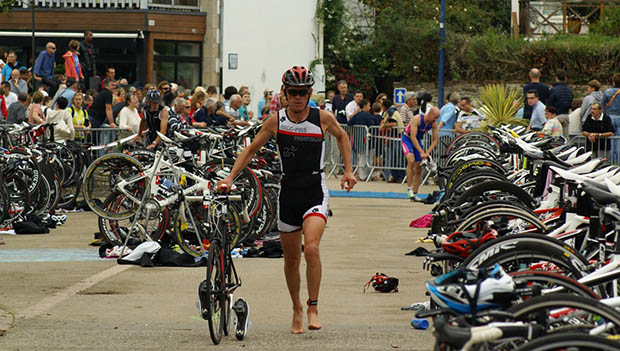 How many times have you sat there listing to friends talk about triathlon things and had no idea what they meant? Those days are over. Here is a helpful glossary of some common and not-so-common terms used when discussing multisport training and racing.

Aerobic Threshold: The exercise intensity at which the blood concentration of lactate and/or lactic acid begins to exponentially increase; when exercising at or below AT, any lactate produced by the muscles is removed by the body without it building up (see also lactate threshold).

AOS: Adult Onset Swimmer is someone who didn't learn to swim as a child.

Aquabike: A multisport event where participants swim and cycle but don't run (also known as swim-bike-done).

Aquathalon: A multisport event where participants swim and run but don't cycle.

Beach Start: A multiport event where the swimming portion begins out of the water, on the
beach or edge of the water.

Bonk: A condition in endurance sports where depletion of glycogen stores results in sudden and severe fatigue.

BRICK: A bike-run multisport training session, where you complete a bike ride and then immediately go into a training run.

BTA: Between The Arms refers to a location where you can mount hydration storage on the bike.

BTS: Behind The Saddle refers to a location where you can mount hydration storage on the bike.

Cadence: When cycling or running, this is the number of repetitions per minute.

Critical Power: The highest average effort you can maintain for a specific period of time. Usually referred to as CPn, where n may be an interval of five, 10, 30 or 60 minutes. CP60 is essentially the same thing as Functional Threshold Power.

Critical Speed: The theoretical swimming speed that can be maintained continuously without exhaustion. This number is usually expressed as a function of distance, usually over 50, 100, 200 or 400 meters.

DFL: Dead Freaking Last, a.k.a. the last competitor to complete an event.

DL: Draft Legal is a multisport event in which competitors are permitted to ride behind one another, just like a cycling race.

DNF: Did Not Finish.

DNS: Did Not Start.

Du: Abbreviation for a duathlon multisport event, which typically indicates a run and a bike leg with no swim. Sometimes due to weather, triathlons are shortened to duathlons when the swim is cancelled.

Flipturn: When pool swimming, the action one performs when reaching the end wall: tuck, forward flip and push-off in streamline position, followed by a rotation, so that your face is pointing down. Also known as a tumble turn.

Floating Start: A multiport event in which the swimming portion begins in the water.

FTP: Functional Threshold Power refers to the maximum average power output, measured and expressed in watts that you can sustain for 60 minutes at a given point in time (see also Critical Power).

HRM: Heart Rate Monitor refers to a wearable device, like a watch or a strap that you can wear around your chest, that measures heart rate.

Hydration: Refers to liquid you take in, usually an electrolyte and/or carbohydrate solution, to fuel before, during or after a race or training session.

Lactate Threshold: The exercise intensity at which the blood concentration of lactate and/or lactic acid begins to exponentially increase. When exercising at or below the LT, any lactate produced by the muscles is removed by the body without it building up (see also aerobic threshold).

NDL: Non Draft Legal; multisport events that do not permit competitors to closely follow—draft—each other during the cycling leg of the event.

Negative Split: When referring to pacing, a tactic where you get faster as the race progresses.

Nutrition: Refers to solid food you consume while training or racing.

OTB: Off The Bike is usually used in the context of running after cycling (ex. I just ran a sub-20-minute 5K OTB).

OWS: Open Water Swim; any non-pool swimming—taking place in a lake or the ocean, for example.

Rollers: A type of static bicycle trainer consisting of three drums, or "rollers"—two under the rear wheel, and one for the front—on top of which the bicycle rides. A belt connects the middle roller to the front roller, causing the front wheel of the bicycle to spin when the bike is pedaled.

T1: Transition One refers to completing the swimming portion and beginning the cycling portion of a multisport event.

T2: Transition Two refers to completing the cycling portion and beginning the running portion of a multisport event.

Trainer: A device that fixes a bicycle in place to allow the user to cycle without going anywhere.

Transition: The section of a multisport course that is set out to hold competitors' bikes and running gear for the different stages of a race.

USAT: USA Triathlon; the governing body of multisport in the United States

VO2 Max: The measurement of the maximum amount of oxygen a person can utilize during intense exercise.

Zone: Categories of training based on the intensity of training in relation to your maximum heart rate or power output.

READ THIS NEXT: Your Most Common Triathlon Questions, Answered