How to Treat and Prevent Heel Pain 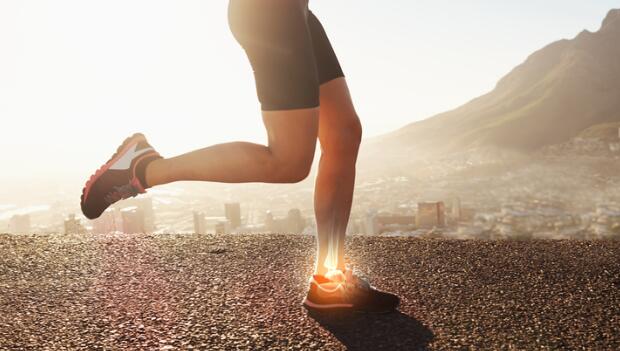 I first saw Dave in my office for heel pain. He had developed the pain two years ago and despite seeing other doctors, he had not had any improvement.

His running had suffered considerably. He used to compete in half-marathons throughout the year, but he was no longer able to run because of the pain. He insisted that he had done all the treatments available, but seemed hesitant to try a more aggressive approach.

He left the office with a home therapy regimen and some education on the importance of resting.

That weekend I spotted Dave running through the neighborhood, at quite a strong pace. At his next appointment I confronted him about his running and he confessed. His was currently running about 30 miles a week, about half of his weekly mileage two years ago. During the summer months he used to run 70-80 miles a week while preparing for marathons. Thirty miles a week seemed like resting to him.

Dave's behavior is common among athletes. Sticking with a routine and ignoring the pain is typical. An injury can be devastating, even for recreational athletes. Many avoid the doctor for fear of what they may find out.

Many injuries require six to eight weeks of rest, and that is not what an athlete wants to hear. With a high tolerance for pain, athletes will frequently train through the pain. Unfortunately, this tends to make injuries worse, particularly when it comes to the foot.

According to Running Research News, a million runners develop heel pain (plantar fasciitis) every year. The American College of Foot and Ankle Surgeons has stated that heel pain has reached epidemic proportions in weekend athletes.

This common condition is typically ignored, especially by athletes who tend to seek treatment only after the problem becomes severe. Starting treatment early will help prevent the problem from becoming chronic and limiting activity for 8 to 12 months.

Plantar fasciitis is the tearing of a ligament on the bottom of the foot where it attaches at the heel. The tearing causes inflammation and the inflammation causes pain.

Pain is felt at the bottom of the heel and sometimes in the arch and usually is the worst at the first step in the morning, but may also occur only during or after a run or activity.

Plantar fasciitis is not typically caused by a direct injury or trauma, but commonly the result of running or walking in a worn-out pair of shoes, training on a new surface or adding hills into a routine.

At the first sign of pain in the arch or the heel, consider the following:

Many shoe companies are designing shoes to be lightweight. This compromises the stability in some brands and results in a breakdown of the shoe within a few months after purchase. Testing your shoes often for stability will help avoid injuries.

If your pain does not resolve in two weeks, visit your podiatrist. Other treatments may include anti-inflammatory medications, night splints, steroid injections, pre-fabricated or custom-made orthotics, castboots, shockwave therapy or surgery.

To avoid developing plantar fasciitis, make sure that you are always training in good shoes. If the shoe starts to wear down on the heel, you foot will take on abnormal stresses and will have a higher chance of injury.

If you have flat feet, consider buying a pair of sport orthotics at you local running store or sports store. Try to run on soft, even surfaces. Running on a sloped concrete surface will increase the chance of injury. Add mileage slowly and incorporate hills gradually.

READ THIS NEXT: How to Prevent and Respond to Runner’s Knee

Christine Dobrowolski is a podiatrist, runner and author of "Those Aching Feet: Your Guide To Diagnosis and Treatment of Common Foot Problems," available via her publisher, Ski Publishing, and at Barnes & Noble and Amazon.com.