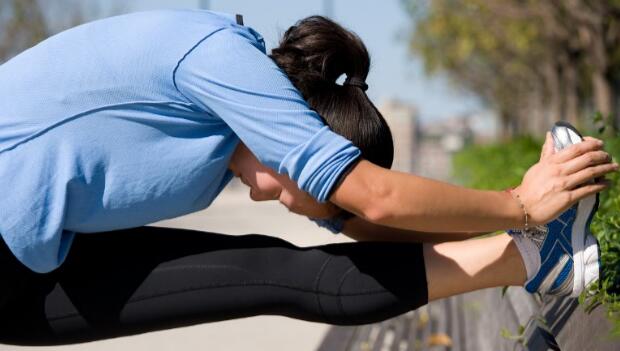 Nothing is more frustrating to  runners than an injury that forces them to take time off from their regular running program. An injury to the hamstring, in particular, can be an annoyingly persistent problem if not dealt with properly.

We recently spoke to RRCA and USATF-certified running coach Sean Coster to address some of the most frequently asked questions related to hamstring injuries, and what runners suffering from these injuries can do to recover as quickly as possible, and prevent re-injury.

What Is a Hamstring Injury?

Hamstring injuries are caused when the muscle that attaches the hamstring tendons to the back of the leg bone is strained and/or torn.  This is most often seen in activities that requires sudden burst of speed, such as soccer, football or running.

But even long-distance runners, whose races don't usually require explosive sprints, can often be afflicted by this painful ailment. "Tendinopathy, which is inflammation of the tendon, is much more common with endurance athletes," says Coster. "But we still don't know what's really going on there."

What is clear is that the soft tissue is affected, even if there isn't "shooting pain."

"Hamstring injuries can range from mild to extreme tearing," says Coster. "Degradation of the tissue isn't always easy to recognize. But it can really affect performance."

Can You Run Through It?

Runners experiencing hamstring pain will need to "use pain as a guide," according to Coster. A runner with lower-grade issues may be able to continue running at a reduced workload.

"It's best to take it day by day, and see how you respond,"says Coster. If your gait or range of motion is affected by the injury, such as limited knee flexion, a trip to a sports doctor should be on your to-do list.

How Do You Treat Hamstring Injuries?

In most cases, hamstring injuries can be treated easily at home, but in severe cases, physical therapy or surgery may be needed. When symptoms are acute, rest, ice, compression, elevation and mild anti-inflammatory medication can help reduce pain and swelling.

As soon as pain is manageable, a runner should begin a program of rehabilitation and stretching followed by a strength-training regimen. Coster suggests runners recovering from hamstring injuries focus on strengthening muscles through slow-contraction training, specifically eccentric movements (which elongate muscles.) "Dead lifts, slow lunges and eccentric heel drops are helpful," says Coster. "Anything to do with eccentric movements can really benefit."

And, if possible, add weights to your eccentric movements to get your hamstrings feeling (nearly) good as new. "Lengthening the muscles, with weights, combs the fibers back into place," says Coster. "It re-aligns them so they're functioning more properly."

How Do You Prevent Hamstring Injuries?

While no method of hamstring injury prevention works 100 percent of the time, there are ways to minimize the risk of tears. Increasing strength and flexibility in the abs, hips, glutes and legs is important.

"Many runners claim to be allergic to strength training," jokes Coster. "Thinking of [strength training] as a form of dynamic stretching seems to help, and can go a long way toward the keeping the runner's hamstrings as healthy as possible."

Looking for something else? Search for an event to add to your calendar.