As part of PDOP Pumpkin Days 2021 we will be having the PDOP Punkin Chunkin Contest.

Three divisions for the contest:

Think you might be up to the punkin chunkin challenge? Up next, choose your weapon.

Punkin Chunkers have a wide choice of options for their mechanism to streak the skies with pumpkin. Each type is based on force, power and torque and it is up to the participant how they will do it.

Participants are responsible for the creation and transportation of their own chunkin device.

Air Cannon
Any machine using compressed air to launch a pumpkin is called an air cannon. Air is compressed into a tank. When the constraint holding that air is removed, air expands back to its normal volume. The result is released air acts like a spring and forces the pumpkin through the tube at great volume, expelling the pumpkin out.

Catapult
A machine using stretched springs or rubber bands, which store energy. When the springs or bands are pulled and then released, the stored up energy is transferred to the arm of the device, which hurls the pumpkin.

Torsion
A Torsion machine is any device that uses twisted rope as its primary source of power. It relies on a rope that works by torsion or twisting. The rope stores mechanical energy when it is twisted. The amount of force it releases is proportional to the amount it is twisted.

Centrifugal
Any machine with an arm that spins at least 360 degrees to launch a pumpkin. The basic idea in a centrifugal is to accelerate a pumpkin by spinning it in a circle many times, with each rotation gaining more and more momentum until it can build up enough energy to propel the pumpkin forward.

Trebuchet
The basic idea of a trebuchet is to transform the potential energy stored in the lifted heavy mass into the kinetic energy that is the motion of the smaller mass (the pumpkin). It uses a short arm, which is weighted down with a heavy object to counterbalance against the long arm, where the projectile (the pumpkin) is placed. When the heavy mass of the short arm falls down, it provides energy to fling the long arm.

We cannot wait to see everyone there.

Registration includes access into PDOP Pumpkin Days on Saturday the 23rd only.

Bring your registration confirmation for access to PDOP Pumpkin Days.

Participants are responsible for the creation and transportation of their own chunkin device. 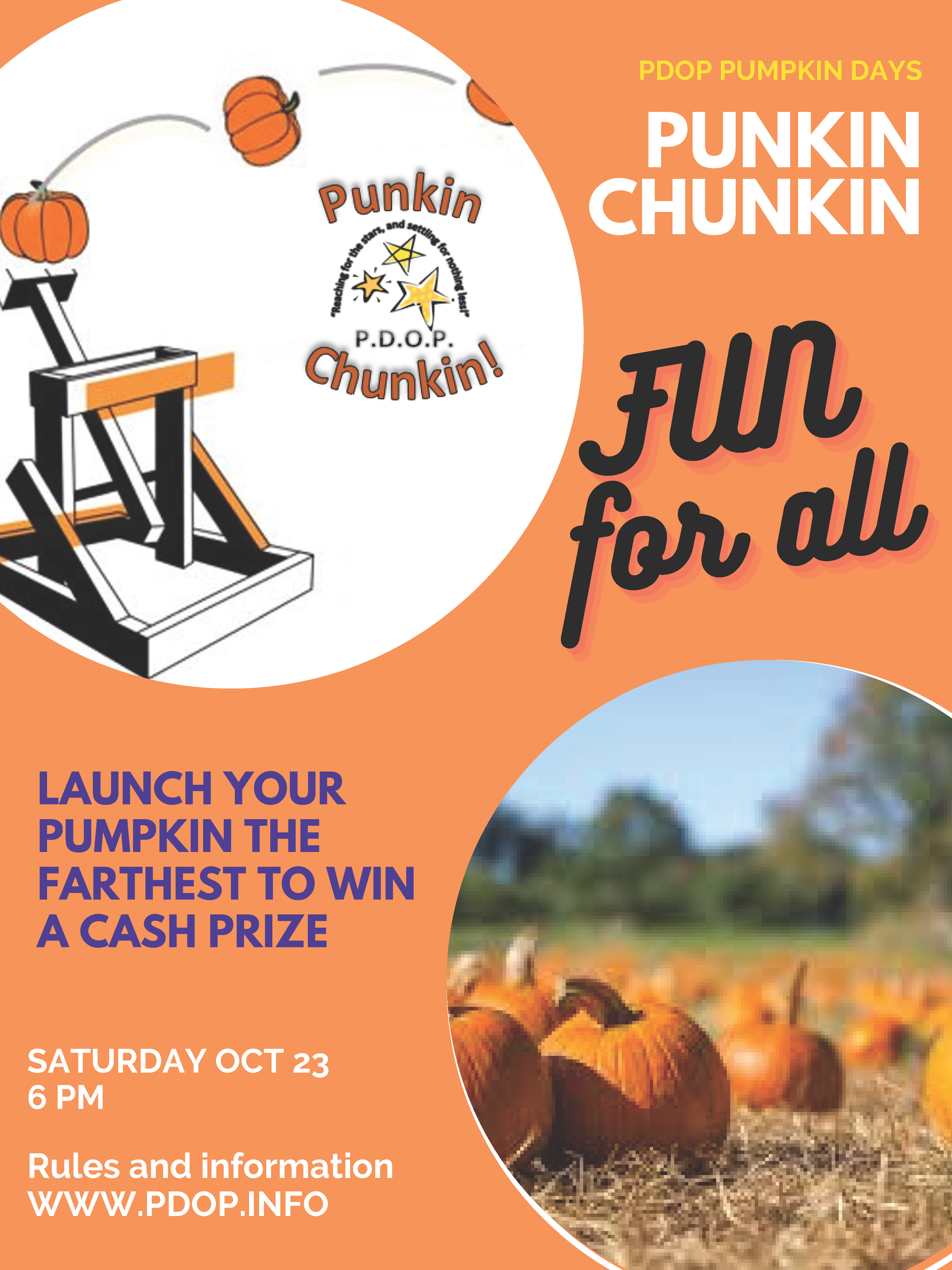