How to Protect Your Private Parts on the Bike 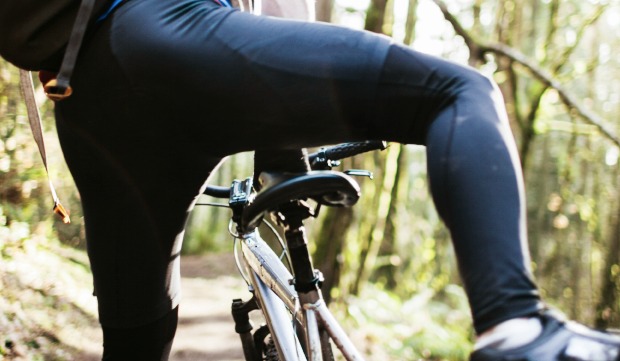 Genital and perineal pain and numbness in bicyclists, which is also called, “Cyclists Syndrome” or pudendal neuralgia, is caused by compression of the pudendal nerve and artery as they pass through the perineal area (the area between the anus and base of penis or vagina).

This compression leads to pudendal nerve entrapment and irritation and decreased blood flow. It has been reported that 21 to 61% of bicyclists report genital numbness and 19% report erectile dysfunction (Andersen and Bovim 1997; Sommer et al. 2001). Prolonged sitting on a bicycle seat can also lead to irritation of the bursa and skin that overly the sitting bones (ischial tuberosity). This can lead to bursitis and skin irritation, chafing and even ulcerations.

Bicyclists will feel pain, numbness, burning and/or tingling of perineal area, anus, scrotum and/or labia while bicycling and sitting, usually for more prolonged periods of time. The symptoms usually resolve after stopping cycling and sitting but can persist for hours or even days. With further nerve injury and/or vascular occlusion, erectile/sexual dysfunction and even impotence may be experienced. The ability to urinate or to have a bowel movement is not usually affected, although one may experience increased urinary and/or bowel urgency or frequency. The diagnosis of pudendual neuralgia is a clinical diagnosis, as there are no specific medical test for this problem.

The main of focus of management of pudendal neuralgia and ischial tuberosity irritation is to reduce the pressure in the perineal area and buttocks:

Lowering one’s seat and sitting in a more upright posture by shifting the bicycle seat forward and tilting the front of the seat downward can reduce the pressure in the perineal region (Spears et al. 2003; Gemery et al. 2007). Furthermore, intermittently changing your riding position and standing on the pedals during a ride will change the pressure point on the perineum and ischial tuberosities.

Bicycle seats without a protruding nose and those with a center channel cut-out have been shown to significantly reduce pressure on the perineal region (Lowe et al. 2004; Gemery et al. 2007). Furthermore, the bicycle seat should be sufficiently wide such that the cyclist’s weight is supported directly under the ischial tuberosities. When purchasing a bicycle seat, the distance between the ischial tuberosities should actually be measured and matched to the appropriate width seat. Other aspects of the seat design to also consider are the stiffness of the seat rails, surface padding material and gender-specific designs. Several seats may need to tried to find the best one.

If one is having significant difficulty finding a correct bicycle seat and/or positioning on an upright bicycle, then switching to a recumbent bike could be considered. With recumbent bikes, there is no direct pressure on the genitals or perineum.

To minimize ischial tuberosity and buttock skin irritation, one should wear bicycling shorts with thick chamois padding and breathable material. Some shorts are designed with incorporation of gel in the chamois pad and center cut out in the padding to reduce pressure on the pudendal nerve. Avoid shorts with seam lines that overly the ischial tuberosity and perineum. Applying thick cream or petroleum gel to the perineal area and buttocks can further help reduce friction between the skin and lining of the shorts.

Oral and/or topical NSAIDs can help to reduce the inflammation of the pudendal nerve.

If one’s symptoms are not improved with these recommendations and/or if one develops symptoms such as difficulty or painful urination, sexual dysfunction, and open bleeding sores, then consultation with one’s family physician should be strongly considered.