10 Cycling Etiquette Tips When Sharing the Road With Drivers 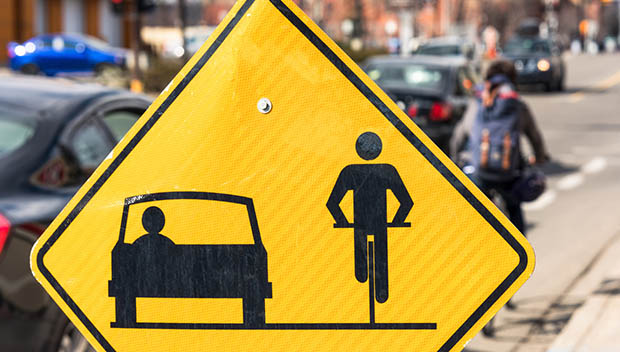 There have been conflicts between cyclists and drivers since the dawn of man (maybe not that long, but you get the point). While many of these "disagreements" might have a valid argument, it never helps when either side digs in and isn't willing to change or see the other's point of view. Bikes nor cars are going anywhere anytime soon, so it's best to try and get along.

Sharing the road with cars can be dangerous, but there are things to keep in mind to help protect yourself and foster a healthier relationship between motorists and cyclists. While you can't control other drivers' actions, you can control how you ride and conduct yourself on the road.

Here are 10 cycling etiquette (read: safety) tips to keep in mind when sharing the road with drivers.

Ride with traffic, not against it.

This first one is easy: Ride with the direction of traffic. Not only is riding against traffic illegal (a bike is considered a vehicle and follows the same laws as cars), it's also dangerous. Drivers are looking for cars moving in the same direction, so this holds true when they come across bikes, too.

Ride on the road, not on the sidewalk.

As we mentioned above, bikes are held to the same laws as cars. Whenever possible, ride on the shoulder of the road instead of the sidewalk. This is safer for you, the cyclist, since cars will be expecting you in the street as you roll through an intersection or past a driveway. It's also safer for pedestrians who aren't expecting an incoming cyclist. If the road is too narrow or traffic is moving too fast, it's appropriate to ride on the sidewalk, just slow your roll, and be mindful of others.

Despite any name-calling or obscene gestures this might provoke, as a cyclist you have the right to take an entire lane. This isn't recommended for a single rider unless the road gets too narrow, but certainly don't be afraid to exercise this right when riding in a group. It's safer to hold up traffic through a tight area than have cars try to pass you and potentially run you off the road.

When cars take a right-hand turn from the farthest lane to the right, rarely do they look over their right shoulder for cyclists. Watch for drivers making a right-hand turn and remove yourself from their blind spot by moving to their left—especially if you're planning on going straight through the intersection.

Bike lanes are your best friend.

If you have bike lanes or bike paths in your city, use them! Not only are they much safer than sharing the road with cars, but they're more efficient for cyclists, too. If the lane shares a road with cars, be sure to watch out for parked cars, or as mentioned above, cars turning right (or cars merging onto the road).

Just because you're on a bike doesn't mean you can roll through stop signs or red lights. Sure, it's against the law, but there's more to it than that: By following the traffic rules and patterns, you're more predictable, which makes riding with cars safer. And FYI, this holds true for drinking and riding—be responsible when going out and riding home by bike.

Another way to help prevent any issues when sharing the road with vehicular traffic is to be consistent. This means you need to ride in a straight line at consistent speeds whenever possible, and don't try to weave your way through stopped traffic or take a shortcut through a parking lot.

MORE: 8 Cycling Hand Signals for Your Next Group Ride

Watch out for car doors.

We've all known someone who was riding on the shoulder of a road when all of a sudden, a parked car's door opens, inevitably causing the rider to collide with the door. Depending on your speed, this can lead to serious injury. Be sure to give parked cars at least a few feet of room, and slow down to look for drivers sitting in cars who might decide to open the door.

By now you should be more than aware of the importance of following the rules of the road, and left turns are no exception. This can be done one of two ways: either hop off your bike and wait on the sidewalk to cross the street in the crosswalk (walking your bike), or merge into the left turn lane and make your turn as you would a car. Choose whichever option feels the safest and most comfortable for you for each specific situation. And if you choose remaining with the cars, don't forget your hand signals as you merge and turn.

Be mindful of your surroundings.

Only you will know what feels right and what doesn't when sharing the road with vehicular traffic. If something's not OK, or you're not comfortable on a specific road, don't be afraid to pull over, stop riding and call someone to pick you up or wait until traffic clears up. Keeping the previous nine points in mind will go a long way to ensuring your safety, but being hyperaware of your surroundings (leave headphones, your phone and music in your backpack or jersey pocket) ultimately falls on your shoulders.

READ THIS NEXT: 8 Bike Lane Etiquette Tips for Cyclists