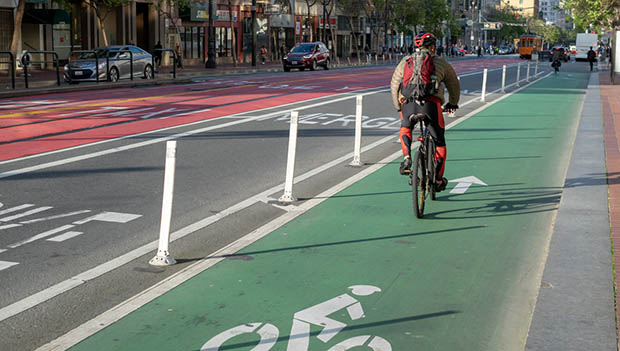 If you have bike lanes in your city, congratulations! Bicycling has become one of the fastest growing modes of transportation in the U.S., and local policymakers have been approving more and more bike lanes to accommodate this influx of two-wheeled travelers. There are two different types of bike lanes—some share the streets with cars and are separated by a painted line while others are protected, meaning they're separated like a sidewalk for bikes.

While both options have made commuting and traveling by bike safer, there are many unspoken rules to keep in mind when using this relatively new infrastructure. From passing correctly to watching your speed, we've listed eight bike lane etiquette tips all cyclists should keep in mind.

Be Aware of Your Surroundings

Veteran cyclists on weekend group rides generally trust other cyclists in the group to make the right decisions while navigating the roads. This can be the opposite when it comes to bike lanes, which are safer from vehicular traffic, but other cyclists and pedestrians can pose potential hazards. Pay attention and constantly be aware of your surroundings. Be ready to brake if a dog or kid darts across the lane or suddenly stops.

Just because you're kitted up and riding a $5,000 carbon fiber road bike doesn't give you the right of way to blast down the bike lane. Bike lanes are designed for everyday cyclists, meaning you'll see a mix of cyclists on a variety of bikes. This might be a group of tourists on rented Citi Bikes, office workers commuting to work or even families towing their little ones in a trailer. If the lane is clear, feel free to pick up the pace, but you probably won't have the runway to bag your next KOM.

Make sure your bike is in good working order, meaning your brakes work, tires are pumped up and your shifters are working correctly. Also make sure you're carrying all the tools and supplies needed to fix a flat tire. This includes a hand or CO2 pump, tire levers, spare tube, patch kit, multitool and anything else you might need. A preventable mechanical issue might cause you to crash, which ultimately might cause someone else in the bike lane to crash, too.

Gone are the days when sketchy helmet-free riding was cool. Even if you're only meandering along on a beach cruiser, accidents happen and it's important to be safe. Always make sure you're wearing a helmet (that's buckled, of course), make sure you're dressed appropriately for the weather (high-vis gear is always a good idea) and make sure you're carrying your phone, spare cash, your ID and your insurance card. Also, bike lights are especially important on dawn or dusk rides.

You've more than likely been frustrated when you ride up to a slow-moving pack of joggers or people standing in the bike lane taking pictures, so don't be that person to someone else. If you need to stop, pull off to the side, dismount and move to the sidewalk. This keeps traffic flowing and everyone that much safer.

This one is simple: Treat passing in a bike lane as you would in a car on the road. If you're a slower rider, stay to the right. If you're planning on overtaking a cyclist, pass on the left. Once you've passed said rider, move back into the right lane and repeat as necessary.

Note some bike lanes have only two lanes—one lane for each direction separated only by a painted line. If this is the case, be especially cautious as you move across the line and into the oncoming lane as you overtake a slower cyclist. If you see someone riding your direction, don't risk it—simply wait until he/she passes before making your move.

We've all been startled by another cyclist who has passed us a little too quickly without saying a word. It's always a good idea to have a bike bell, or at the very least yell "on your left" as you pass a slower rider. Be warned, not all riders on the bike path are super confident on two wheels. Yelling "on your left" sometimes causes them to look over their shoulder and swerve left, so be cautious and watch your speed.

Don't Be a Jerk

Everyone has their own story, and everyone in a bike lane means one less car on the road. Smile, wave and encourage other cyclists as you pass by. Also, if you see someone on the side of the lane with a mechanical issue, don't be afraid to stop and provide some assistance. Sharing a tube, pump or even just your advice goes a long way!

READ THIS NEXT: 8 Cycling Hand Signals for Your Next Group Ride