The E League plays primarily on Thursday evenings but additional days may be scheduled as needed. (based on league registration).

The E League is a coed league for the novice player that wants to enjoy the recreational experience of ice hockey. This is a non-checking league and slap shots are NOT allowed. One female must be skating at all times. Each team must have two females at each game to prevent one female from skating a full game alone. Two officials are used for each game. The season consists of 9 regular season games with the top 2 teams advancing to the championship. Games are played on the indoor and outdoor ice rinks. The maximum number of teams in this league is 8.

The last day to register is Monday, March 8. League balances are due on Sunday, April 4. League play will start the week of March 15.

NOTE: All game times and days are subject to change. 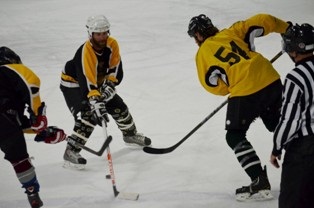