Triathlon Suits Explained: Two-Piece or One? 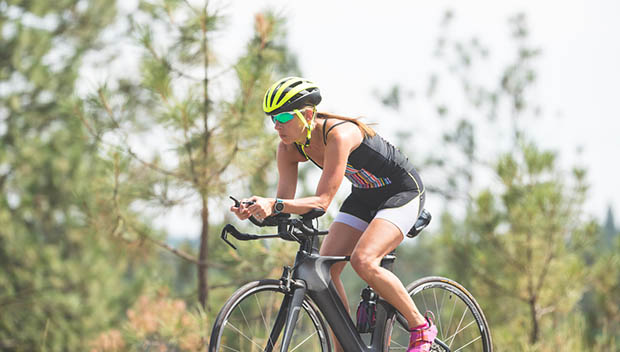 Your first triathlon can be quite an undertaking. From training to simply figuring out race day logistics, there's a lot to know about this multifaceted sport. While we've addressed several beginner questions in Most Common Triathlon Questions, Answered  (yes, triathletes pee on their bikes), there's still plenty more to go over.

There's an especially high learning curve when it comes to gear—you're essentially gathering equipment for three performance-oriented and technical sports. Some pieces of gear can only be used for one or two legs of the race (think wetsuit or a pair of sunglasses), but a triathlon suit is the only piece of gear that's worn from the gun to the finish line. It's often overlooked, but there's a lot more to it than meets the eye.

Keep in mind each brand fits differently and uses different types of fabrics, so these are generalities about typical triathlon suits.

A two piece suit is exactly what you'd expect—a triathlon "kit" that includes a separate top and bottom. Generally, they're purchased together from a matching line from a specific brand, but sometimes you can find separates if you prefer a different fit or color pattern.

A two-piece has a few advantages over a one-piece triathlon suit. First, a two-piece suit generally feels less restrictive since the fabric isn't pulling on the shoulders and allows for a more natural side-to-side motion. Next, a two-piece suit can feel cooler than the alternative (this also depends on the fabric) because the midriff can be exposed and allow body heat to escape.

Two-piece suits are also much easier to manage for a mid-race bathroom break than a one-piece (just drop your drawers and go versus unzipping and having to pull the entire top down). Also, if your upper and lower body are two different sizes, a two-piece suit allows you to pick what's best for each part of your body.

Despite these positives, two-piece triathlon suits do have a few cons. They're less hydrodynamic, with more drag during warm water swim legs that are wetsuit-free (water can get scooped up by the shorts as you swim). Similarly, they've also been proven to be less aerodynamic, especially when hunched over in the aero position on a triathlon bike (the fabric can bunch up with the zipper protruding). This is less of a performance-orientated con, but it's common for the top to ride up, exposing the lower back and abdomen while hunched over, potentially leading to sunburn or showing too much backside.

While a two-piece suit has ties to the origins of the sport, a one-piece triathlon suit has quickly become the go-to option for multisport athletes who are the most competitive (most pros wear a one-piece tri kit).

A one-piece suit is more aerodynamic than a two-piece and generally has some compression built-in (so there's added benefits there, like delaying muscle fatigue). And, since there are less seams in the suit design, there's generally less chafing—especially under a wetsuit. Each of these become more and more important as the race distances increase.

One-piece triathlon suits aren't without their flaws though. This depends on the fabric of an exact model, but they sometimes feel warmer than a two-piece option. This may not be a problem for shorter races, but you might notice the difference on an iron-distance triathlon in the heat. Also, since it has a one-piece construction, it fits people with a consistent body profile better than if an athlete has a heavier upper or lower body. Bathroom breaks are also tough when wearing a one-piece triathlon suit—you have to unzip the top, pull your arms through the arm holes and pull the top all the way down to do your business. Taking off the top isn't too bad, but putting it back on while you're hot, flustered and trying to beat the clock—not to mention potentially damp from the swim or sweat—can be tougher than you'd expect.

No matter which route you choose, make sure you're purchasing the option that's best for you. Most triathlon clubs will offer their kit design in both one-piece and two-piece kits, so be sure to try each on before you purchase. If possible, see if you can borrow a previous year's kit from a friend to feel the difference for yourself. Also consider your race schedule—are you racing in the heat? Are you swimming with or without a wetsuit? Are you doing an IRONMAN and will likely have to stop to use the bathroom? Keep other features like UV protective fabrics, the chamois quality and additional pockets for storing gels, salt tabs or lip balm in mind too.

Remember, comfort is king (and being comfortable leads to better performance), so pick the one- or two-piece suit that fits like a second skin.

READ THIS NEXT: Triathlon Suit Review