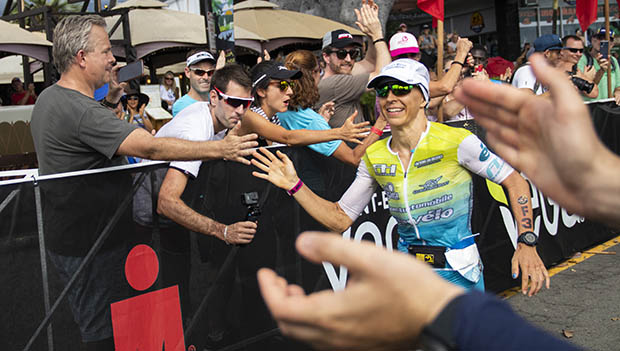 As quickly as it started, the 2019 triathlon season is officially over. It was truly one of the most exciting years in recent memory, with new young talent stepping up and winning big, and multi-time champions adding more victories to their list of achievements. It was full of drama, come-from-behind victories and shakeups in both the men's and women's fields, with plenty of hard racing to share.

From Katie Zaferes' five WTS gold medals to Jan Frodeno cementing his legendary status as the best to ever complete on the Big Island, we gathered 10 of our favorite triathlon moments (in no particular order) from 2019.

With a total of five WTS gold medals throughout the 2019 season, American Katie Zaferes capped off a stellar year with a win at 2019 ITU World Triathlon Grand Final Lausanne. She edged out British triathlete Jessica Learmonth in the final couple hundred meters of the race, ultimately finishing four seconds ahead and securing her title. Learmonth and Georgia Taylor-Brown rounded out the podium, and subsequently wrapped up the series standings in the same order.

American Men Throw Down in Kona

The Germans have undoubtedly dominated at the IRONMAN World Championship in recent years, but the 2019 edition proved the future looks bright for American competitors. Tim O'Donnell went sub-eight hours to finish in second behind Jan Frodeno's record setting performance (more below), Ben Hoffman finished in fourth with a time of 8:02:52 and Chris Leiferman finished in 10th with a time of 8:13:37.

Speaking of strong performances in Kona, Jan Frodeno silenced all doubters at the 2019 IRONMAN World Championship. He didn't compete in 2018 due to a stress fracture in his hip but came back strong to not only win for the third time overall, but beat Patrick Lange's seemingly unbreakable course record of 7:52:39. Frodeno dominated the race, posting a 7:51:13 and leaving his competitors in awe.

There are a handful of professional cyclists who have completed an IRONMAN (Cam Wurf and Andrew Talansky to name a few), and professional cyclist Adam Hansen can now add his name to the list. The Lotto-Soudal rider finished 38th overall at IRONMAN Florida with an impressive time of 9:05:54 despite limited swim and run training.

We shouldn't be surprised, she crushed the competition at 2019 IRONMAN Copenhagen with a time of 8:31:32 and placed third on the Big Island last year, but Anne Haug's impressive performance at the 2019 IRONMAN World Championship shocked the triathlon scene. With Ryf struggling, Haug took advantage of her situation, laid down a 2:51:07 marathon split and crossed the line with a time of 8:40:10 (six minutes ahead of Lucy Charles-Barclay) to secure her first IRONMAN World Championship title.

If you've never heard of Gustav Iden, you're not alone. This 23-year-old Norwegian won the IRONMAN 70.3 World Championship seemingly out of nowhere, besting the likes of Alistair Brownlee and Sebastian Kienle on his way to glory. He's won a few ITU World Cups and finished on the podium at a few WTS races, but this victory (3:52:35) was the crowning achievement of his young career.

Lucy Charles-Barclay Gets a Puppy

Grit is the best word to describe Lucy Charles-Barclay's performance in the 2019 IRONMAN World Championship. It was clear from the start that she was racing aggressively to win the race, but unfortunately her pace through swim and the bike impacted her run, where she was eventually passed by Haug and Crowley. Charles-Barclay crawled back in the final kilometers to catch and pass Crowley—ultimately finishing in second place.

Her motivation? Her husband said if she finished in second place he'd get her a puppy (and two puppies for first, none for third).

Ups and Downs for Daniela Ryf

Like the Golden State Warriors or the New England Patriots, we've become accustomed to seeing Daniela Ryf win time and time again. While 2019 was a great year for Ryf, her 2019 record wasn't without some blemishes.

She secured her fifth IRONMAN 70.3 World Championship title in Nice with a time of 4:23:04 over Holly Lawrence (second, 4:27:02) and Imogen Simmonds (third, 4:28:10). On the flip side, her performance in Kona was less-than-ideal despite being the overwhelming favorite—she struggled on the bike and the run to ultimately finish in 13th with a time of 9:14:36.

It's safe to officially call Arizona State's triathlon team a dynasty. The Sun Devils won their fourth consecutive Division I title at home in Tempe, Arizona, led by Audrey Ernst and Kyla Roy who finished 1-2 overall. The University of South Dakota and East Tennessee State University teams finished second and third in the Division I team rankings, respectively.

She's a name that's synonymous with XTERRA and winning—Flora Duffy not only secured her fifth XTERRA World Championship title, but she also became the first elite athlete to win as many. She led the entire race from start to finish, clocking the fastest swim, bike and run splits of the day for a time of 2:49:43. Bradley Weiss won the men's race for the second time (winning in 2017 and placing second in 2018).

READ THIS NEXT: The Best Social Media Posts From the 2019 Kona IRONMAN World Championship