How to Perfect Your Swim Tempo 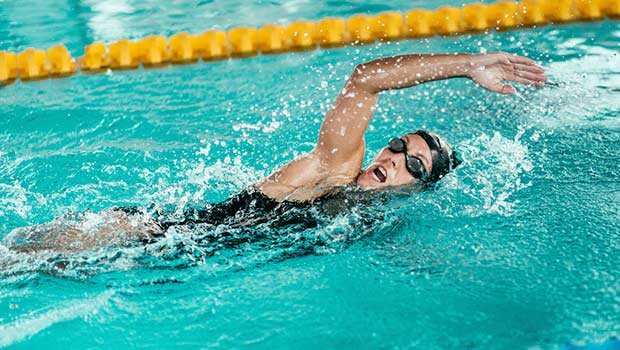 Effective and efficient swimming is the ability to hold or catch the most amount of water at a given stroke rate while minimizing the amount of drag on the body for each stroke. If a swimmer focuses on stroke rate at the expense of developing stroke length, speeding up the stroke will result in a decrease in efficiency. In other words, you’ll be slipping more water faster.  If you overemphasize distance per stroke over tempo, you won’t be very efficient, either.  The best stroke is the one that finds a balance between tempo and distance per stroke for the individual swimmer.

Tempo can impact body position, overall speed, and—if it is inconsistent during a race—can decrease overall efficiency of the stroke. Similar to running, where the arms drive the cadence of the legs, in swimming, the legs can drive the tempo of the arms. A casual review of the 2016 IRONMAN World Championship in Kona shows that men in the front pack have a stroke tempo between 1.3 and 1.6, and the front pack of women were roughly the same. The second and third packs of men and women tend to have tempos outside the range of the front pack, typically faster and slower.

The second half of the equation that determines speed and efficiency in swimming is stroke length, or distance per stroke. You can determine your DPS by counting the number of strokes it takes to get to the other side of the pool at your “cruise pace.” For faster distance swimmers, a count in the mid-30s in a 50m pool for men is the norm and for women it tends to be in the upper-30s to low-40s. Stroke length or distance per stroke is impacted by overall hydrodynamics, which includes body position in the water and body type. Strength is also a component, as is “feel for the water,” or the catch, and how much water a swimmer can hold during the pull phase of the stroke.

How does stroke rate and stroke length impact training? As a swimmer trying to develop a faster and more efficient stroke, design your training around improving both tempo and DPS efficiently while finding the right balance between the two. Long, slow, continuous distance along the lines of the popular 10x400-meter freestyle tends to train the body to have a slower tempo. If those sets are swum without a high level of focus on tempo and DPS, they tend to impact stroke mechanics, which leads to a shorter stroke length. In other words, those sets train inefficiency into the stroke.

Shorter, higher intensity repeats drive speed and efficiency into the stroke at a much lower cost.  If you use paddles a lot, you will train your body to swim at a slower tempo and diminish your feel for the water—again, impacting negatively your distance per stroke.