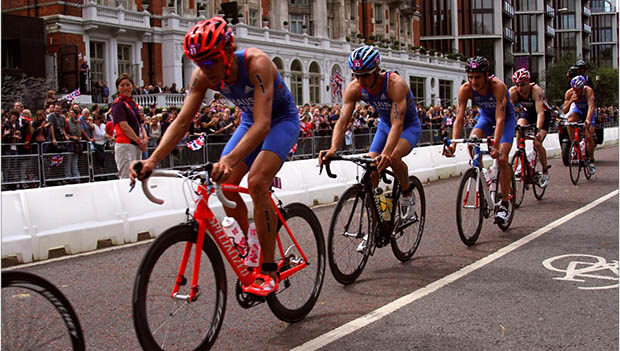 Despite being comprised of three of the oldest sports in history, triathlon is a relatively new sport that has taken the world by storm. Its widespread success is no surprise—it's a social, healthy way to stay in shape while pushing your boundaries and challenging yourself at the same time.

However, triathlon can have a serious learning curve. Even if you're a veteran of the sport, there's always something new to discover, whether it's honing your nutrition or developing a new skill.

We've taken a less-serious approach and gathered 10 of our favorite triathlon-related fun facts. From peeing on the bike to the oldest IRONMAN finisher, be sure to drop these tidbits at your next 5 a.m. swim session.

IRONMAN: By the Numbers

It's no secret that finishing an IRONMAN is a serious undertaking, and the numbers say it all. It's not uncommon for an athlete to burn over 10,000 calories during the race, and on average an IRONMAN will lose 5.5 pounds during that time as well. That's about five times the recommended caloric intake for the average American!

It may be gross, but to a triathlete peeing your pants is almost a rite of passage. Triathletes pee in their wetsuits during the swim, pee on their bike while in the saddle and pee while running. In a sport where every second counts, a bathroom stop might mean the difference between a spot on the podium and fourth place.

There's a reason an Olympic-distance triathlon is called "Olympic"—the distance was standardized prior to its debut at the 2000 Olympic Games in Sydney. This format was previously called the international distance and had a 1.5-kilometer swim, 40-kilometer bike and a 10-kilometer run.

In 2018, age-group triathlete Hiromu Inada became the oldest IRONMAN World Championship finisher. At 85 years old, he completed the 2.4-mile swim, 112-mile bike and the 26.2-mile run in 16:53:50, crossing the line less than seven minutes before the cutoff. He proved age is just a number, and it's never too late to start—he didn't complete his first triathlon until he was 70!

While many of us may never qualify to race on the Big Island, there's something almost as prestigious that takes place down Ali'i Drive—the "underpants run." It's a fun, 1.2-mile run on the IRONMAN World Championship course that occurs two days before the race. It's a sight to behold with people of all shapes, sizes and ages running in their underpants or bikinis for a good cause.

This may be common sense, but many people ask why the order of a triathlon goes swim-bike-run. It's simple—it's ordered based on safety. The swim is first so athletes are in the water when they're fresh and not exhausted after two other legs. You can always stop to walk your bike or pause during the run, but unfortunately you can't really stop and take a breather during the swim.

Breaking eight hours in an iron-distance race was once compared to breaking the two-hour mark in a marathon: impossible. With several individuals now below the eight-hour mark, it's been a competition to see just how low it can go. With one of the most impressive showings in triathlon history, German Jan Frodeno smashed the iron-distance record with a time of 7:35:39 at Challenge Roth in 2016. It's almost incomprehensible, with many age groupers completing a 70.3 in the same amount of time.

While swimming, cycling and running in the same day can be traced back to France in the 1920s, the first time a triathlon was called triathlon took place in San Diego in 1974. It was created by two San Diego Track Club members, Jack Johnstone and Don Shanahan, and included 46 participants in its inaugural event.

Even if you've never owned a pair or raced a triathlon, a disc wheel stands out when you see one. They're loud, unique looking and super aerodynamic. But despite being allowed at most triathlons, disc wheels are forbidden at the IRONMAN World Championship. Why? The 65-plus mph crosswinds on the Big Island make disc wheels dangerous, despite their otherwise aerodynamic advantages. Nobody wants to see a triathlete lose control and blown off the road into the lava fields.

Many triathletes attribute the NBC coverage of the IRONMAN World Championship to what got them into the sport. But did you know this annual 90-minute program has won 17 Emmy awards for outstanding edited sports event coverage? It's been nominated 55 times since its debut in 1991, and the Kona broadcast most recently beat out World Series baseball, UFC and Super Bowl coverage in 2017.