The Secret to Playing a Weak Opponent 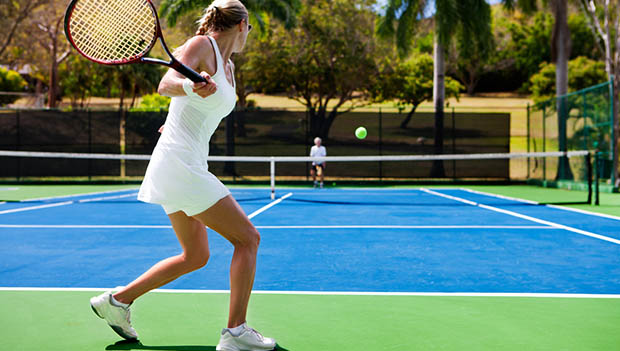 Playing tennis against a weaker opponent is harder than you might think. The fear of losing to an inferior player can cause you to hit the ball timidly, while overconfidence can lead to a string of unforced errors.

Either one can lead to an unnecessary loss. Playing a weaker opponent is a mental challenge—and one that requires patience and focus.

The first rule is to never underestimate a player who has less experience, isn't as skilled as you are or has a lower NTRP rating. Weaker players are often hungry for an upset. Walking out on the court with confidence is good. But overconfidence, especially when facing a weaker player, can be dangerous.

Approach all of your matches the same way. Tell yourself, "If I do not play good tennis I can potentially lose this match."

This mantra isn't designed to put pressure on you. Instead, it should force you to stay focused. It shouldn't matter if you have a winning record and are facing a player who has lost their last 10 matches. Give your opponent your full attention and play your hardest.

If you walk out onto the court thinking you have an easy win about to come, your overconfidence can lead to a loss. When you start to think a win will come easily, you can become frustrated and nervous if things don't go your way.

No matter who you're playing, the best way to approach the match is "point by point." Don't start speculating on who will end up winning the next point, game or the set. If you let your mind wander beyond the current point the match can get away from you.

You can usually expect the weaker player to come out strong. I have played several matches that went to 3-3 in the first set before I went through and won 6-3, 6-0. The better player should have more patience and should be able to identify weaknesses and expose them better.

Many times, the weaker player can't keep up with the level of play and starts to have some self doubt. Once that happens, an opportunity opens up for the better player to take control of the match. The weaker player, feeling pressure from the stronger player, may lose patience and start to go for shots too soon.

If you ever get stuck on the court with someone who has a NTRP of 1.0 or lower than you, it's a good time to practice certain parts of your game. Anyone who is rated that much lower than you will not be much of a challenge. So how do you keep it interesting for both players?

Winning 6-0, 6-0 is not much fun and doesn't help either player. Instead of playing your "A" game, try developing your "B" game. If you don't serve and volley much, give it a shot. Try new serves, spins and strategies. This is a good time to practice the shots that need work. You will most likely hit a decent amount of errors and it will help to keep the match close and more fun for everyone. You can always resort back to game plan "A" if things get ugly.

In the end, just because you think you "should" win, does not mean you "will" win. Stay focused, give your absolute attention and play it one point at a time. If you truly are the better player, it will show.

READ THIS NEXT: 3 Ways to Mentally Dominate Your Opponent