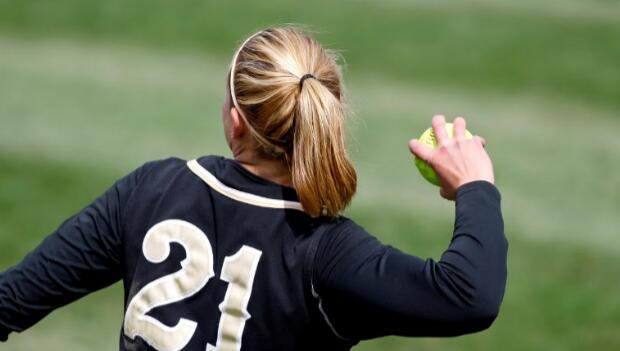 Players not throwing correctly? Teach your squad the proper way to throw a softball with this series of pre-game isolation drills.

Have the players start approximately 10-12 yards from their partners, sitting "Indian style." By throwing in this position, the players isolate the upper-body motion, using the glove hand for proper shoulder rotation.

To help emphasize proper follow-through, the players should follow through, with their throwing arm elbow outside their knee, as if picking a blade of grass. (This can also be done in the kneeling position: with both knees on the ground, bodies square to their partners.)

Have the players proceed to the one knee position--stride leg in front--pointing towards their partners. The players should move back to approximately 15-20 yards.

This focuses on upper-body mechanics and accuracy. Again, the players should follow through with their throwing elbows outside their knee with bend in the waist.

Players put all three together and begin throwing from the standing position. Again, emphasize using the glove hand to point at the target as well as proper follow-through. (Throwing wrist should brush the outside of the knee).

Players begin in the "crane" position: stride leg raised in the air (knee bent); glove hand pointing at target; throwing hand in the launch position (ball outside ear). Players should hold this position for 2-3 seconds before releasing the ball.

To ensure proper follow-through, the players then take one full step towards their partner after releasing the throw. This helps the players focus on properly using their glove hand for emphasis on shoulder hip and knee rotation.

While partners are working their "Crane" positioning, the receivers set up in the straddle position. When the throw comes in, they perform sweep tags. This allows the receivers to train as well as the throwers.

Throw No. 7: Throwing for Distance

Once the series has gone through, continue to have the players back up until they are able to make accurate, strong throws DIRECTLY to the receiver. No lob throws. This builds valuable arm strength.

See more softball drills & workouts or find a softball league near you.