Why You Should Run a Long Distance Relay 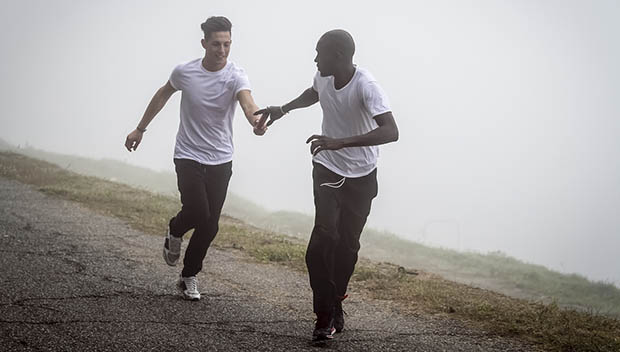 One of the hottest trends in racing right now is the long distance relay. These epic, multi-day events draw huge crowds of runners both new and highly seasoned. To find out why living out of a van for 24-plus hours while driving and running hundreds of miles is so popular, ACTIVE reached out to Ragnar, the largest relay brand in the world, and one runner who has participated in two of the biggest relay races around. Here's why they both say you should definitely put a long distance relay race on your calendar.

While the particulars of each race differ slightly, the overall format of a long distance road relay looks something like this: Teams of runners race from point-to-point over great distances (usually around 200 miles) by taking turns running legs that typically range between three and seven miles while the rest of the team drives to the next exchange point in one or two vans. The events last 24 hours or longer and are run on open courses—that means alongside traffic, usually with volunteers or staff support only at the exchange points.

Generally, a road relay has 12 team members traveling in two vans with each participant running a set number of legs. It is possible, however, to run the relay as an "ultra" event, having only six team members who each end up covering twice the total distance than regular team members would.

A relatively new format, the trail relay is typically run on a closed course at a single location with participants camping in a racers' village. There are multiple loops of different lengths and difficulty, and each runner on a team must complete every loop once.

One of Running's Hottest Trends

Long distance relay races have been around for decades, but over the past 10 years participation has skyrocketed, according to Inga Johnson, chief marketing officer for Ragnar, the brand that hosts races in over 30 U.S. locations and six different countries. Following other running trends, Johnson says Ragnar has seen huge participation growth in its trail races over the past few years.

"We're seeing trail runners who are new to Ragnar but also runners who are brand new to trail racing," Johnson says, reporting that around 60 percent of Ragnar's trail racers have never run a trail race before their first Ragnar Trail relay.

Most of Ragnar's runners are over 30 and, "as far as runners go, it's a pretty even split between men and women," Johnson says. "But more team captains tend to be women; it's about a 60/40 split, and more of our repeat racers are women." By far, relay racing is most popular in the U.S., where it's been around a lot longer. "We're in six countries now," Johnson says. "But there's a bit of a learning curve over there [in Europe]. At first, we had to explain what relay racing was, but it's starting to catch on."

In addition to Ragnar's events, there are many other independent long distance relay races across the country. A quick search will likely find at least one or two nearby, but part of the fun can also be traveling and racing in different locations.

To find out why relay racing is so popular, ACTIVE reached out to long-time runner Jeff Carter of Laguna Hills, California. Carter, who has run the Huntington Beach to San Diego Ragnar road race, was enthusiastic about his experience. "I enjoyed the team aspect of it, and the challenge of running over 24 hours. You get to run in the middle of the night, which is quite different, and in the heat of the afternoon."

Carter has also run one of the oldest and most popular relay races of all time—the Hood to Coast relay, a 199-mile race from Timberline Lodge on Mt. Hood to the city of Seaside, Washington, right on the coast. The H2C, as it's known in relay circles, is so popular that the race registration cap (now over 1,050 teams) has been met on the opening day of registration every year for the past 21 years in a row!

At the time when he ran it in 2013 Carter said, "The Hood to Coast seemed to attract more elite and foreign teams, so it's maybe a bit more competitive. It's still got the party aspect, with everything from beginner to experienced runners, but it has a serious running aspect to it as well."

When asked to list what he loved about the long distance relay, Carter had a long list. "You're stuck in a van with a bunch of people for over 20 hours! You get to know a lot about those people. You also get to run through new areas and over terrain you've never seen before." Carter trained with friends from his area, but the rest of his team was filled out with people from out of state. "You get to meet new people and make new friends too."

The Challenge Is Part of the Fun

We also asked Carter what he didn't like about relay racing. "Well," he chuckles. "You're stuck in a van with a bunch of people for over 20 hours, so you'd better make sure they're people you like." Not only are there personalities to deal with, but "it's cramped, it can be cold and damp, you might doze off or nap but you don't really sleep."

Not to mention there's the possibility of getting lost. "It never happened to me," Carter says. "But you hear of vans getting lost and runners showing up at the exchange point with no one there to pick them up."

Since he brought up the damp, cramped van, we had to ask: Does it get smelly in there? "Uh, it certainly can be," he says. "That's why you've got to bring a change of clothes."

It turns out that saving your teammates from your post-run odor isn't the only reason to bring a change of clothes. "Come with an open mind, and a clean pair of socks," Carter advises. He also recommends bringing an extra pair of underwear, a complete change of running clothes and a second pair of running shoes, changing clothes as soon as you finish each leg so you don't get too cold and putting on dry socks and shoes so you don't blister. "And a warm towel can be nice," he adds.

When asked whether he would run another long distance relay race, Carter beams. "In a heartbeat! And I think most people definitely would too."

Johnson summed up why this crazy, smelly, sleepless caravan event intrigues runners and keeps bringing them back for more. "The beauty is that we like to do things that you could never accomplish alone."

READ THIS NEXT: Everything You Need to Get Started Trail Running