The Top 5 Tips for the Average Runner 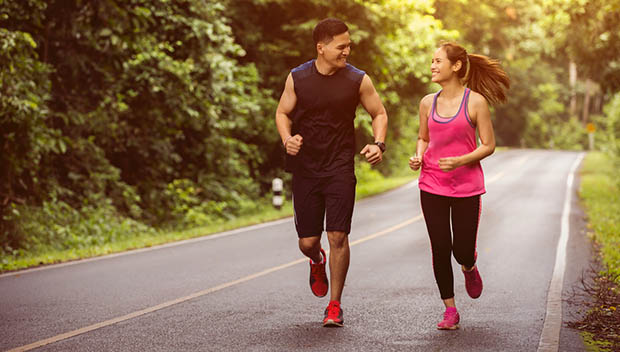 Runners come in all shapes, sizes, ages and abilities, but there's one thing they all have in common: the desire to improve. While competitive elites and pros are already privy to the kind of training tips that can bring out their best, the average runner may not. To get the inside scoop, we asked a top running coach to share his take on the biggest mistakes runners make, as well as some training tips to improve performance.

Kelly Mortenson, owner of RunMN, is a 12th-place Olympic Marathon trials finisher and a current elite-level masters athlete who has been coaching runners at all levels for more than 20 years. These are his top five tips.

Mortenson said the most common mistake the average runner makes is running way too fast on easy or base mileage days. He stresses the goal of an easy run is to recover from hard workout days and long runs. He also underlined the importance of training the body to utilize fat stores, which can only happen at that lower heart-rate level.

"When you're running easy, you work your fat stores more for energy, but running too hard, you're just burning through your carbohydrates," he says. This becomes especially important as the distance you run increases because carbohydrate stores "only last about an hour and a half to two hours," according to Mortenson. He noted that for new runners, this may mean you spend a good amount of time walking until you build up enough aerobic fitness to keep your heart rate low while jogging and running.

Mortenson's second tip was related to his first one: "Since their base mileage training is too fast, they're not recovered enough to give it their best when it comes to speed days, long run days and even races themselves." He noted that, ironically, this is most common among runners who are training for a specific event. The desire to meet a certain time goal often prompts a runner to train too fast on recovery days and subsequently go too easy on quality days. "They're not improving," he says matter-of-factly. "It's fine if they're not really concerned about performance—just running for fitness or something like that—but they're not going to perform to their best."

Focus on Your Feet

Mortenson's next tip shifted away from pace and onto technique. "Recreational runners tend to over-stride and land more heel-first. Doing this, they're kind of braking with each foot strike." It's apparent why putting on the brakes with each stride is a bad thing, but foot placement isn't the only area where runners can improve. Mortenson explains that cadence (measured as the number of footfalls per minute) is also important.

"There have been a lot of studies on recreational runners' and beginning runners' stride rate, and their stride rate is—not always, but for the most part—in the 150 to 170 range. If you look at the faster elite runners, most of them tend to have a higher turnover rate, like 175 to 185." It turns out that foot strike and cadence are related: A higher cadence often coincides with a shorter stride length, causing the foot to land more directly under the body's center of mass rather than out in front, thereby eliminating that heel strike "braking" mechanism.

Increasing cadence can be tough to do, so Mortenson suggests using music or a metronome app to help you along. Try running to a playlist where the beat in all of the songs is five to ten beats faster than your current stride rate. Over time, keep increasing the song or metronome tempo until you hit the sweet spot: 180 beats per minute.

Good running form has to do with more than just your feet, Mortenson reminds us. "Many recreational runners, their arm-swing is not very efficient." Whether you swing your arms across your body or hold them up high in a tight position, improper arm-swing can be the root of a number of bad form issues. "It can cause a lot of upper back pain or make them run all hunched over," Mortenson says. This kind of bad form may not only slow a runner down but could also contribute to injury.

So what does a good arm-swing look like? Mortenson coaches his clients to run with relaxed arms, bent just to ninety degrees, and to actively drive them forward and back, parallel to the direction of running, never across the body.

Give Yourself a Break

"No. 5," Mortenson says with a knowing grin, "is don't compare yourself to others." He sees a lot of runners reading the latest magazines and blog posts about running and then feeling inadequate about their own mileage or running pace. This can be detrimental to a runner's performance because they really need to be following their own training plan for wherever their abilities lie at the moment.

Mortenson ends with a call for runners to smartly manage their own training plans: "Take it slow. Build up gradually, with rest days, recovery weeks and time off after an important goal race," he says, noting that he takes 10 days to two weeks completely off after his own goal races.

Whether you're new to running or you're a seasoned veteran, putting Mortenson's tips into practice is sure to make you a stronger runner.

READ THIS NEXT: An Ode to Slow Runners