Running Down the Past: Why I’m Running the DONNA Marathon for Breast Cancer 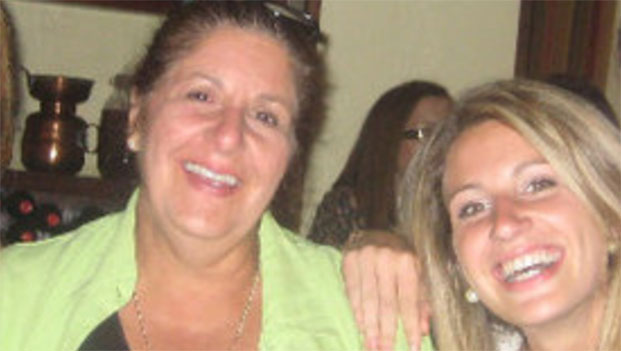 A strange waking dream came to me on a long run three months ago—a memory from my childhood. I was eight years old, and up too late at night. I sat tucked in a hallway next to my mother's bathroom, watching her take out her rollers, admiring her thick hair. She wore a sleeveless nightgown, and I could see a red scar under her armpit and black and purple dashes and lines across her chest. I jumped up and ran back to bed, frightened and confused by what I'd seen.

The next morning, I mustered my little girl courage and asked about the marks. My mother explained that they helped the doctors know where the radiation needed to be aimed. To fight the cancer. Cancer.

Twenty-three years have passed, and I still can't shake the feeling of fear I experienced when I glimpsed those strange markings on my mother's beautiful olive skin. Beyond this memory, I recall little about her disease: First, an announcement that she had "a cold," followed by a strange family meeting where my father told us that what he'd actually meant to say was that our mother had breast cancer. Then came an operation and about a hundred visits to various doctors. For six weeks, my beautiful mom soldiered on through her treatments, quietly enduring radiation.

She remains mostly silent on the subject to this day. She doesn't talk about it much. We didn't celebrate her remission—in fact, once the cancer was gone, she tried to act as if nothing had changed. I put it behind me, as well, probably too young to fully understand the stakes. But as an adult, the memories come back, slices of frozen time, images that will not be ignored. I think about this when I run, I suppose, in an effort to reconcile the past and to fuel my forward momentum.

My running life has changed this year. I've gone from forcing myself to stick to a complicated training program, to trying to run for joy and as a means of meditation. Partly because of this change in attitude, and partly because I need a place to rest these memories, I decided to run a race that will benefit breast cancer research and care, to honor my mom and the amazing strength she's shown as a woman. I want to use the one tool I have—running—to show her all that I've learned from her: to be stubborn and fierce and to keep moving forward in the face of fear.

After signing up, I called my mom and told her about my plan to dedicate a race to her. I explained that it's the DONNA Marathon in Jacksonville Beach, Florida, named after a three-time breast cancer survivor, Donna Deegan, who's raised huge amounts of money and awareness for the cause. I told her it's a whole weekend of fun, of celebrating life and wearing pink, and that I'm participating in her honor.

"Why?" she asked, followed by an awkward pause. She seemed genuinely confused. Then, she listed three other women who've recently undergone treatment for breast cancer. "It would be better to honor those people," she said.