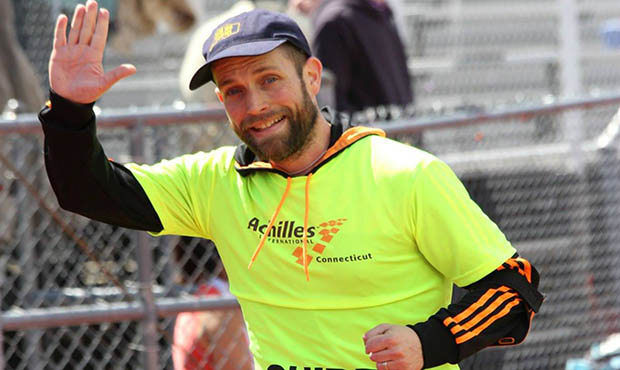 It wasn't until his mid-30s that the urge to run struck him, but when it did, he listened. Now he's on a mission to run his entire home state, thanks to the Run 169 Towns Society, a group for Connecticut runners seeking a unique challenge.

Feinberg, a web engineering manager for Subway, started running in 2012, after he found himself carrying a little extra weight. He knew he needed to exercise, but wanted an activity that he could squeeze into his busy schedule.

"As someone who's always paced back and forth as a way to focus my thinking, running felt like a natural fit," Feinberg says.

The now 39-year-old husband and father of two hasn't looked back since. He first ventured into racing by signing up for a 5K trail race, and it was there that he learned about the Run 169 Towns Society.

With his interest piqued, Feinberg researched the Run 169 Towns Society, a group founded to unite runners aiming to run a race in every town of Connecticut.

Since membership is free, he signed up and dedicated himself to covering his home state one race at a time. Little did he know he would also be making lifelong friends along the way.

Feinberg completed a handful of races in the first couple of years and ramped up his training in 2014. So far, he's run 50 races, covering almost one-third of his total goal.

Though he loves getting to regularly see his closest friends and having a quick adventure in an otherwise normal week, it's the impact the journey has had on his family that means the most.

Feinberg's family has now joined him on numerous races, making for a number of unforgettable experiences. There was the time he ran alongside his seven-year-old son for Feinberg's first four-mile race in Berlin, Connecticut.

"[My son] was screaming and shouting with such joy that the smile didn’t leave his face for days," he says.

And then there was the race his five-year-old daughter ran in the town of Norwich. She took so long to reach the finish line that the police ended up escorting her at the end, while everyone cheered.

Feinberg also remembers accompanying his wife while she ran her first 5K in her hometown of North Haven as he crossed off another location from his list. Having his family join his mission only makes the experience that much more special.