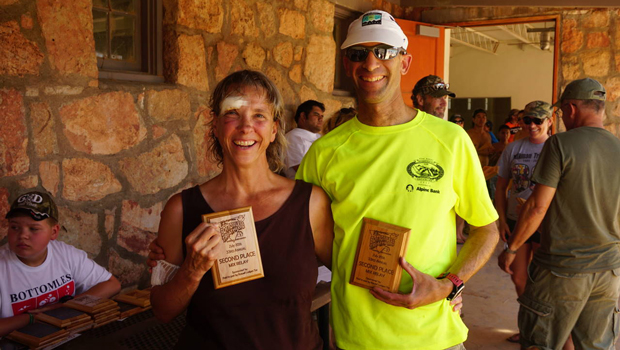 The mid-June heat and rugged trail was taking a toll on Karen Williams. Exhausted and hurting, she had less than three miles to go in a trail marathon through New Mexico's Valles Caldera National Preserve.

She was thinking about her finish time when she looked to her right and saw it.

A black bear—charging right at her.

As Williams yelled "No!" and raised her hands, she caught a glimpse of a bear cub nearby and knew she was in deep trouble.

The mama bear knocked her down, ripping into her arms with her teeth. Williams screamed, which seemed to agitate the bear even more.

"She whacked me in the head, and I thought my eye had popped out," Williams, 54, recalls. "I reached up to push it back in and realized it was just my sunglasses dangling on my cheek. I shut up and tried to roll on my belly, and she grabbed my neck and tried to shake me."

Williams, an emergency care nurse and Army intelligence veteran, was in the fight of her life. She rolled over on her stomach, stopped moving and played dead. Finally, the bear relented.

"She batted me on my back hitting the CamelBak and huffed off to collect her cubs," Williams says.

The actual attack only lasted about a minute, but Williams' ordeal was far from over.

Badly wounded, she laid motionless on the ground for an agonizing ten minutes as one of the baby bears worked its way down from a tree.

Eventually it did, and the trail grew quiet. To make sure they were gone, she waited another ten minutes before moving into the shade. In trauma nurse mode, she started assessing her injuries.

She didn't notice a lot of blood, but couldn't move her arms well. She felt dizzy and nauseous. Not only had she fought off a bear, she had just run 24 trail miles on a hot day. She sipped warm water from her CamelBak.

She began to yell for help in a deep voice so she wouldn't be mistaken for an animal.

Noticing a dirt road about 30 feet away, she considered looking for someone, but "every time I tried to stand up I thought I would puke," she recalls.

She knew there were other runners behind her in the race, so she waited. Finally, some 30 minutes after her ordeal began, two runners appeared, and she quickly sent them off to get help. Until this point, Williams says she didn't have time to feel scared.

"I started hearing large things in the woods around me and was afraid that some other animal might have smelled the blood and come in for a snack," she says. "I started talking loudly, asking if anyone was there over and over, and the big noises stopped."

Meanwhile, her husband, Mike Engelhardt, who had just completed his first marathon, was recovering at the finish line when the race director told him what happened.

"My initial concern turned to worry when I got the initial report of her injuries from one of the other runners that helped her," he says.

After a nerve-racking hour, he finally saw his wife as she was being loaded into a medical helicopter to fly to a hospital in Albuquerque.

"The medics told me that she was being a back seat driver and telling them what to do," he says. "Then I heard Karen yell, 'Mike, I love you! Please get my Garmin watch, my shoes and my CamelBak.'"