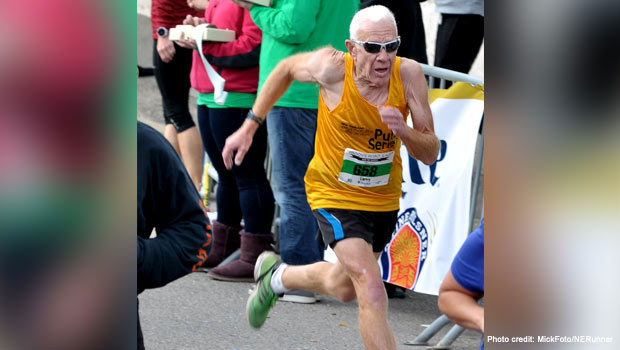 Lawrence Cole hopes for a better experience than the last time he ran Boston.

At the 2012 race, temperatures soared into the low 90s, causing scores of runners to suffer from heat-related ailments, including Cole.

“I spent 15 to 20 minutes on a stretcher getting cramps in my legs massaged,” he says. “I had a really bad day with cramps.”

He finished in six hours and change, a time he wants to beat this time around.

“I’m a competitive person,” he says.

A widower, Cole likes that running and racing allows him to socialize.

“I have a beer or glass of wine with dinner, and I’m not giving it up.”

After years of playing ice hockey in a seniors’ league, Cole started running when he was 72. Cole attributes his lack of overuse injuries to his late start.

“I have some friends who have been running for years. They kept running after high school and college,” he says. “They have had knee injuries. I haven’t. “

Cole uses a pacemaker and suffered from low blood pressure last year, but he’s currently doing well and got an OK from his cardiologist to tackle Boston. He received his entry through The New England 65-Plus Runner Club.

“I’ve been very fortunate,” he says. “I felt good in the races I’ve run this year.”

Cole is following an online 18-week training program that has him running six days a week building up to a 24-mile training run, his longest before Boston.

As for his diet, Cole watches his salt and red meat consumption. But a tasty beverage is a must-have every evening.

“I have a beer or glass of wine with dinner, and I’m not giving it up,” he says.