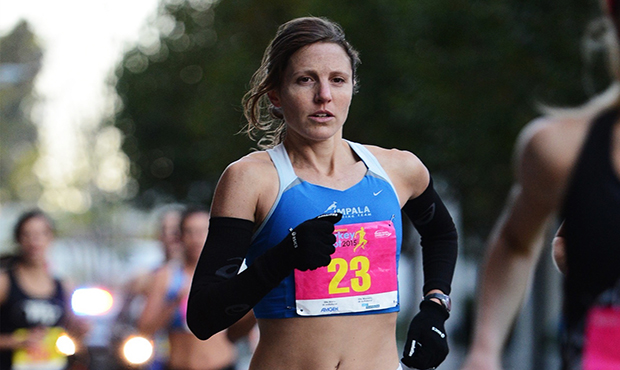 The Balancing Act: McWalters, who ran for Stanford University, gets in 10 to 15 miles before her 4-mile bike ride to work, where she works on design projects until 6 or 7 p.m.

"I run to be a stronger person and better human being, and that translates to the work I do," says McWalters, who also graduated from Harvard University's Graduate School of Design.

After she gets home, McWalters sometimes fits in strength exercises and stretching, but makes sure to give herself time to relax and not think about training.

"I strive for a balance," she says. "Especially with the marathon; it's important to maintain a mental reserve."

Her relationship with running has evolved over the years, especially after living in India for 10 months as a Fulbright scholar in 2012 and 2013. McWalters tried to keep training, but illness and fatigue forced her to take a break. When she returned to the United States and moved to New York, running seemed "small" compared to the living environments she saw in India.

With the help of running club North Brooklyn Runners, McWalters gradually fell in love with the sport again. It's also how she met her current boyfriend, Brian.

In the beginning of 2015, the couple moved back to their home state of California, where McWalters enjoys running on wooded trails in the Bay Area and is a member of the Impala Racing Team.

"In the natural environment, I feel more alive," she says. "I love being out here."

Trials Goal: This will be McWalters' third trip to the U.S. Olympic Trials.

She ran the 5,000 meters at the 2008 Trials. In 2012, she ran her first ever marathon at the Trials, after qualifying for it with a half-marathon time.

"I was a little in over my head," she says. This time around she is better prepared. "Mainly I want to be competitive."