How to Treat and Prevent Runner's Knee 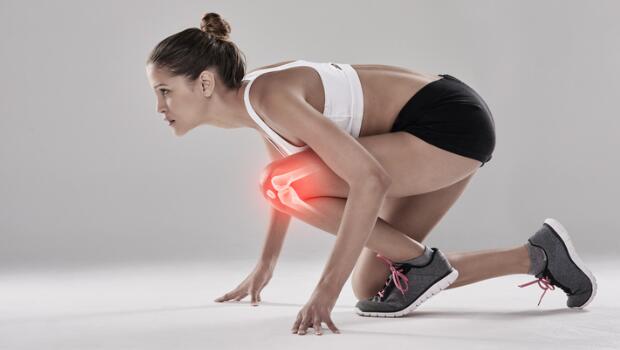 Undoubtedly one of the most common running ailments, runner's knee or patellofemoral pain syndrome (PFPS), can hamper your training or leave you completely sidelined.

The pain associated with runner's knee is located under, slightly above or below the kneecap. It generally worsens when athletes run uphill, downhill, or up and down stairs. A popping sensation is sometimes audible. In the worst cases, the knee may swell.

More: How to Prevent Knee Pain and Injury

What Is Runner's Knee?

A term used to describe a number of knee issues, runner's knee often occurs because of an increase in mileage. While some harriers will experience sporadic pain, others have problems nearly every time they add miles. The condition can also be related to poor running form and core strength.

The pain occurs when the patella, or knee cap, rubs against the lower attachment of the femur, usually because the patella is out of alignment. It’s also possible, but less common, that the cartilage that normally lies beneath the knee cap has worn down.

"A lot of these injuries result from motion or mobility problems in the hip or low back," explains Dr. Aaron LeBauer, a physical therapist based in Greensboro, North Carolina. "Or it can be an instability issue because of lack of core engagement. If you have an imbalance that causes the leg to be unstable, it may be a hip control issue."

Indeed, strength and mobility imbalances will have a greater effect on the body over increased mileage, resulting in issues like runner's knee. The dilemma is you often won't know you have these imbalances until your knee starts to nag you. At this point, it becomes important to back off and identify where the injury originated.

"The biggest problem is that people don't listen to their bodies and they run through pain," says LeBauer. "Running through sharp, shooting pain just makes the issue worse; [runners who do this] end up in my office because they keep running rather than resting or seeking treatment earlier."

More: How to Treat and Prevent Common Running Injuries

How to Treat Runner's Knee

When it comes to treatment, LeBauer says it is important to trace back to the root cause of the pain, and focus on correcting it.

"My main method is to find the area of tension and tightness in the hips, quadriceps, low back and abdominal muscles and, once we can get that to move better, we work on stabilizing the hip, knee, foot and lower leg," says LeBauer.

Research shows that stabilizing the kinetic chain through strength work can do wonders in terms of reducing the pain associated with runner's knee. For instance, one study published in the American Journal of Sports Medicine directed 19 participants with PFPS through an eight-week hip and core-strengthening program. At the end of the study, participants reported significant improvements in pain and knee function.

Another study out of the University of Kentucky showed that gait retraining can be used to reduce the symptoms of PFPS. In guiding a group of runners with PFPS through eight gait retraining sessions, researchers worked on everything from internal hip rotation to pelvic drop in hopes of improving hip mechanics and lessening pain. Following the training, participants reported a major decrease in pain, and improvements were seen in running mechanics.

Runner’s knee isn’t one of those injuries where you want to push past the pain, because doing so will only make things worse. You’re going to have to take some time off. How much time depends on the underlying cause and severity of the pain, so again, getting a professional’s opinion is a good idea.

With any sports injury, the acronym RICE—rest, ice, compression, elevation—is standard protocol, and runner’s knee is no exception. The first time you feel that sharp, stabbing pain, you might be able to shorten your recovery time by doing some quick triage. Sit or lie down with your leg slightly elevated and put a bag of frozen peas or crushed ice on your knee for about 20 minutes (but put a thin cloth between the bag and your skin to prevent a cold injury). Wrapping your knee in an elastic knee brace or bandage immediately after icing can also help reduce inflammation and ease your pain.

When walking and other low-stress activities no longer cause pain, it’s time to test the waters with a return to running. Just try to keep your excited anticipation and frustration at having been sidelined under control. Rushing back into things is likely to put you right back where you started.

Once again, keep Dr. Goldfarb’s runner’s knee mantra in mind: “Slow and steady, not fast and furious.” Keep your runs very short and slow, stopping immediately if you feel the slightest hint of knee pain.

By figuring out what caused your runner’s knee in the first place, addressing those issues and then cultivating a patient, methodical return to running, you can put it behind you and never look back.

How to Prevent Runner's Knee

Even if you've never experienced runner's knee, the treatment plans that deal with strengthening and stabilizing the body through gait retraining also serve as preventative measures. To be sure, any time you fortify your core and hips, you're improving your chances of avoiding a long list of potential injuries.

Another important preventative measure: simply listen to your body and back off if something is nagging you.

"If you're feeling sharp or shooting pain, you might need to stop and check posture or form," says LeBauer. "A lot of times this can help."

If you are taking all the preventative measures and still running into issues, it's worth scheduling an appointment with a physical therapist to identify the root cause of the pain before it turns into a full-blown injury.

"Especially if it's something that is happening every time you run, definitely take care of it before it gets worse," advises LeBauer. "It will cost less in terms of money for physical therapy and [you'll take less] time off of running in the long run."

Jason Fitzgerald is an elite runner and coach, author of several running books, and the creator of the Strength Running Injury Prevention for Runners program.

“Typically, this is an overuse injury,” he says. “It can be caused by doing too much mileage, too soon before the runner is ready for it, at too fast a pace.”

Fitzgerald believes the best way to prevent runner’s knee (and most other running-related injuries) is to avoid overtraining. Dr. Larry Goldfarb, a certified chiropractic sports physician and founder of the Medical Wellness Center of New Jersey, has worked with both recreational and Olympic-level runners for around 35 years and echoes that sentiment. Goldfarb tells his patients that a running program should be “slow and steady, not fast and furious.” Goldfarb recommends that runners gradually build mileage, adding only about five percent per week.

Goldfarb also noted that the right gear could make a difference for some runners. For those who over-pronate, he often prescribes orthotic inserts. He also advises his runners not to scrimp on quality when it comes to running shoes, and to replace shoes as soon as the sole becomes worn. One thing you don’t have to spend a lot on is a knee brace. Goldfarb says that even inexpensive braces available at drug stores and grocery stores can be effective for alleviating pain, because they provide additional support at the patellofemoral joint.

Start off simply with balance stands, clamshells, bent knee raises and short step-ups, progressing to squats and lunges, which will also target the quadriceps, as your strength and alignment improve.

Note, however, that with runner’s knee it is very important that you work up to— but never past—the point of pain, and Goldfarb recommends working with a trainer to ensure that proper form and alignment are adhered to.

Here are a few of the most commonly prescribed exercises by physical therapists and coaches to help runners strengthen their hips and core region. These moves can help athletes avoid runner's knee.

Lie on your right side and bend your knees at approximately a 45-degree angle. Keeping your feet together, slowly lift your left knee to "open up the clamshell." Pause and then lower your knee to "shut the clamshell." Repeat 10 to 15 times on each side.

More: 3 Back and Hip Exercises for Runners

Lie on your back with your knees bent and your feet flat on the floor. Slowly lift your butt off the ground, keeping your back straight and engaging your low back and glutes. Hold for 10 seconds and lower your body back down. Repeat seven to 10 times.

Get yourself into a push-up position, but lower down to support your body with your forearms. Keep your back straight and your butt aligned with your body, fighting the urge to bend at the waist. Hold for 30 seconds and repeat four times.

Lie on your right side, keeping your legs straight. Lift your left leg in the air as far as you can and then lower back down. Repeat 15 times on each side.

On all fours, lift your right knee and left hand off the ground, bringing them together under your body. After that move, simultaneously stretch your right leg back behind your body and your left hand out in front. Repeat 15 times and switch sides.