How This Runner Went from OCD to the NYC Marathon 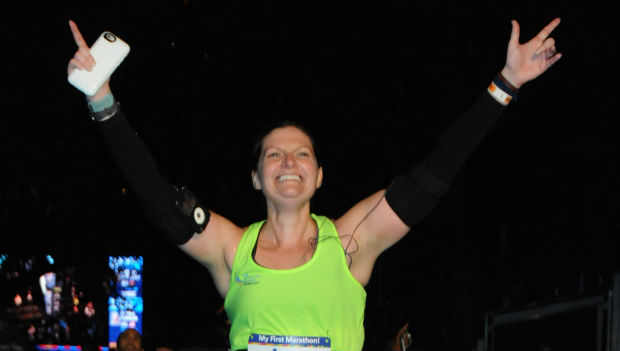 It's November 5, 2017. It's drizzling, chilly. I'm running off the Queensboro Bridge onto First Avenue to start mile 16 of the New York City Marathon.

See, 2004 was a pretty rotten year for me. There were high notes: I was a junior in college with friends and family that loved and supported me. But there was this terrible feeling of dread inside me.

Day and night, I was worried--and not your normal, "Did I leave my straightening iron plugged in?" worry. I'm talking an endless loop of completely irrational fears that manifested themselves in physical ways. My fear of the invisible "germs" in my dorm showers caused me to work out a ridiculous routine that involved three separate towels, two pairs of flip flops and disinfecting my shower caddy every day.

At one point I washed my hands so many times a day that they cracked and bled. When I found myself crying over the sink one morning, unable to stop washing my hands because I just, "couldn't get it right", I knew I had to see a therapist.

Thankfully, therapy and medication helped. After a while, I was finally able to touch my own doorknob, but I'd become dependent on daily anti-anxiety medicine that dulled my emotions and replaced them with a never-ending hunger for sweet carbs. My weight skyrocketed to nearly 280 pounds.

It wasn't the first time I struggled with weight. As a kid, I was never the "athletic" type. In grade school, I envied my thinner, more active friends. In high school, I would fake sick to skip gym class and hang out at the diner until the wee hours of the morning eating mozzarella sticks and drinking hot cocoa. In college, my friends and I would cap off our midnight study sessions with "fat sandwiches," a New Jersey delicacy that included French fries and chicken fingers in the sandwich. I used to say that terrible thing that irks all runners: that I wouldn't run unless I was being chased.

And then on August 2, 2004, my mother was diagnosed with breast cancer, and everything changed.