How Running with Music Changed My Life 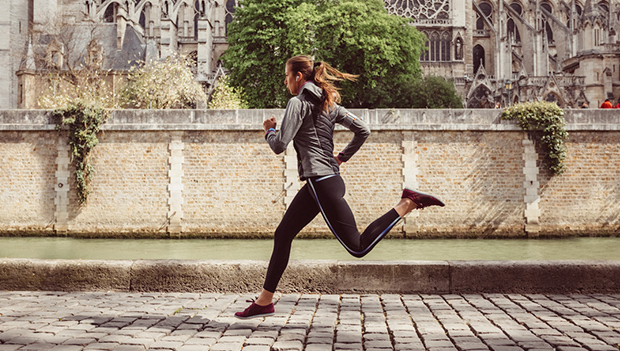 I started running in the late 90’s, long before $1,000 smartphones, wireless MP3 players or streaming music were a thing. Heck, Bluetooth wasn’t even invented until 1998, much less the concept of “running free.”

I ran competitively in college, and logging miles with a portable CD player—literally the only option at the time—just wasn’t realistic. In fact, I’m pretty sure it wouldn’t have been allowed on the cross-country course or track. As a result, I learned to train in silence or with the company of teammates.

But in 2008, I began training for my first marathon and started using an iPod on occasion. As the technology evolved and streaming music apps emerged, it became easier to listen to music on the run. But to be honest, a part of me never truly embraced it. I suppose I felt that music was a distraction—that if I just trained hard enough, it wasn’t necessary. Besides, at that point in my life, I didn’t really need music. I lived and trained in New York City and had dozens of running friends to keep me company.

About a year ago, my circumstances changed.

I found myself training for a spring half marathon through the brutal winters of upstate New York, and as a new mom to boot (hello, naptime miles!). My options alternated between sweaty speed workouts on the treadmill in my basement, and suffering through freezing long runs in the elements. Eventually, I found myself turning to music as I inched closer to double digits.

I’m not alone in realizing that the right tunes can energize a run. A 2004 study published in the Psychology of Sport and Exercise suggests that music can increase motivation and make running more enjoyable. If you’re looking for a legal way to immediately increase endurance and run faster, an up-tempo playlist might be just the ticket.

In fact, some researchers say music can substantially improve exercise outcomes. Drs. Costas Karageorghis and Peter Terry, authors of Inside Sports Psychology and sports psychology experts, claim that music can boost running performance by up to 15 percent. In running terms, that’s the difference between a 24-minute 5K and going sub-21:00.

Run to the Beat

The notion of cadence, or the number of steps you take each minute, is another area where running mechanics and the use of music can collide in interesting ways.

Jack Daniels, the famed running coach and author of Daniels’ Running Formula, is well known for his belief that the ideal cadence is 180 or more. In his experience coaching elite runners, Daniels noticed that his athletes rarely or never took less than 180 steps per minute.