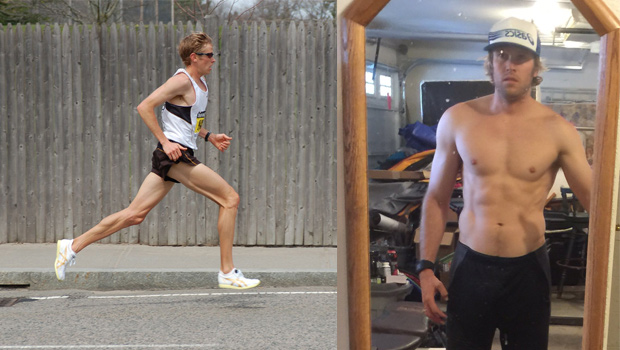 (L: Ryan Hall at the 2009 Boston Marathon, photo by Jennifer Fox. R: An image of himself Hall posted to Twitter in April 40 lbs heavier.)

As he watched the Rio Olympic marathon runners click off the final miles at a sub-5 minute pace, Ryan Hall had many thoughts running through his mind. One of them surprised me: In an arm wrestling match, he’d undoubtedly beat them.

Since his retirement from professional running in early 2016, Ryan has put on 40lbs of muscle. Those upper body muscles have meant that in the last few months, Hall has enjoyed a bit of anonymity, as most people don’t even recognize him now that his body no longer resembles that of a whippet-thin runner. With a focused commitment to two-hour-a-day weightlifting sessions, Hall has managed to transform his distance-runner body into a muscled powerhouse.

While Hall is rekindling his love for running and embarking on a new challenge (seven marathons in seven days on seven continents) to raise money for the Dream Center.  With this shift back to running, one wonders: Will he revert to his “skinny marathoner” self? And just how much does having all that upper body strength and muscle impact us runners?

How Does Upper Body Muscle Impact a Runner?

While your individual body mechanics dictate the exact percentage of the upper body that you use while running, your upper body helps with the forward propulsion phase of the running stride.  As your body weight is transferred from leg to leg with each stride, the abdominals and biceps are used to stabilize, coordinate and direct the forward propulsive movement. The arms counterbalance the leg movement to direct the momentum in the forward (vs. rotational) direction—allowing you to run more efficiently.

For sprinters, this weight is a must to help propel them out of the blocks. Their arms and core provide the torso stabilization required to help transfer power through their center.  In addition, sprinters must condition their arms to handle the buildup of lactic acid as a strong arm drive is critical to being able to maintain proper stride mechanics as fatigue sets in.

For distance runners, having a strong upper body assists in maintaining good posture—allowing you to get more air in and out of the lungs. Strong arms prevent wasted energy from excess rotation and help support good form so you can run efficiently for longer.

However,  any upper body weight is still weight you have to carry over the course of your run, and that extra weight starts to matter more when you are talking about races that last miles vs. minutes.

While some muscle is necessary to counterbalance the legs and support good form, most experts are in agreement that having a lighter body weight translates into faster race times, at least to a point. This is one of the reasons why those world-class marathoners in Rio were so light up top. In order to maximize their VO2 Max, they want to be at their optimal leanness on race day.

An additional argument against building up the upper body is the time component to lifting weights.  Any time spent on lifting (driving to the gym, time in the gym, time driving home) is time that could be spent running. While everyone has their own personal mileage ceiling, the general rule of thumb is that if you can safely run more, you’ll maximize your improvement if you spend that time running vs. lifting.

“Specificity of training is key,”,says Hall. “If your goal is to optimize your speed for a marathon, half marathon, or 10K, I would advise against doing any upper body exercises. However, there are a lot of happy mediums in there. You can still run a good 10K, half marathon or marathon while carrying around a decent amount of extra muscle, but I would say the extra muscle will hurt you more than it will help you.”