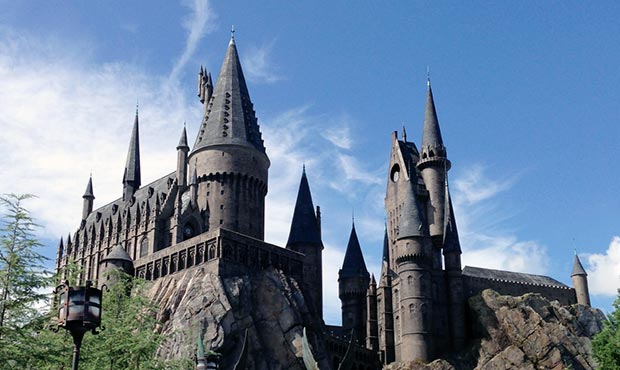 Raising over $500,000 for charity in two years might seem like a magical feat, but there's no wizardry behind the success of the wildly popular Hogwarts Running Club.

Founded in 2014 by husband and wife runners Brian and Dawn Biggs, the club now boasts more than 35,000 members from 42 different countries—with no plans of slowing down.

Brian predicts an even brighter future ahead. "Our goal is to change the muggle world, one mile at a time," he says.

It was Dawn who first inspired the duo to pick up the sport. Determined to run a half marathon, she signed up for one, planning to make a girls' weekend out of it by having her aunt and cousins join in on the fun. Brian happily assumed the supportive husband role, though he didn't quite understand the allure of distance running—yet.

Standing at the finish line, it was the electricity of the event that eventually won him over, and the flashy finisher's medal sealed the deal. Brian, too, wanted to be a runner.

Five days later he ran his first 10K, the longest distance he'd ever run, and quickly committed to completing a half marathon. Knowing he wanted to raise money for a charity, Brian signed up to be a Jimmy Fund athlete and fundraised for the Dana Farber Cancer Institute.

Race day came and so did a new obsession. Brian became addicted to racing and giving back, and he was determined to find creative ways to do so.

And thus, the Hogwarts Running Club was born.

After talking to a friend who had recently run a virtual race as part of another fan club, Brian began twirling around the idea of creating his own running community based on an existing but untapped fandom.

As fans of Harry Potter, Dawn and Brian were surprised to discover an enthusiast group had not yet combined the book series with a love of running. So on March 6, 2014, the pair launched Hogwarts Running Club (HRC), announcing the group's inaugural virtual race as the Sorcerer's Stone 5K, using the name of the first book. Just one month later, 32 HRC members completed the race.

"The beauty of virtual races is that people don't have to go to a specific location at a specific time to run a race, but they can still run with others," Brian says.

Following the race, members posted pictures from their runs as fellow HRC runners commented and cheered them on. The group quickly gained momentum.

HRC went on to host five more virtual races that first year, with all proceeds from the events donated to the Dana Farber Cancer Institute.

Heading into 2015 with a solid foundation of members and an even stronger desire to make a difference, the group decided to diversify its charitable contributions by dedicating each race to a lesser-known charity.

While charities aren't able to solicit partnerships with HRC, their connection can be made through member nomination. Brian believes this idea is what sets HRC apart from other running groups.

"We've been able to give groups like the Brotherhood Ride $62,000 and Miles for Cystic Fibrosis $45,000," Brian says. "Choosing a favorite charity is impossible because we love them all, but one that we are most proud of is the Harry Potter Alliance, in which we donated $77,500 to support literacy and the building of a library in Uganda—a place where books practically don’t exist."