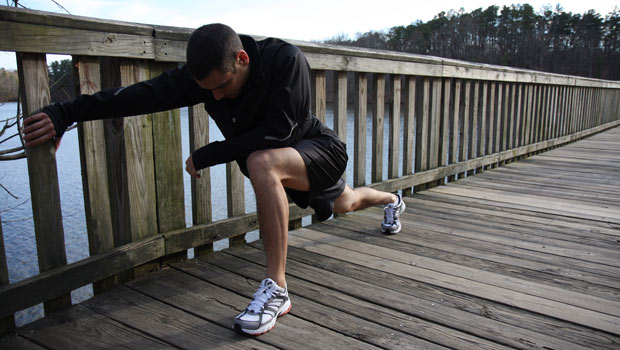 For many runners, hip flexors are a source of chronic tightness and pain, but this muscle group doesn’t have to be a bugaboo. Learning how to utilize these muscles correctly can allow you to harness their power and improve both speed and economy.

Strengthening and lengthening this muscle group can turn a weakness into an overwhelming strength.

As the term implies, “hip flexors” refers to a group of muscles—known as the Iliopsoas—whose primary function is to create flexion of the leg at the hip joint. This is the motion necessary to run or to kick something.

Ask most runners where their hip flexors are located and they’ll point to a web of soft tissue over the top of their femur and just lateral to the pubic bone. The primary hip flexors do pass through this area in a narrow band of connective tissue, but the majority of the muscle mass is located much higher and deeper than you’d think.

Thanks to hours and hours spent sitting every day, the hip flexor is a source of tightness and pain.

The psoas major originates along the five vertebrae of the lumbar spine. That means this muscle stretches all the way from the bottom of your rib cage, to the inside of your femur, an inch or two below the hip joint. The muscle is wing-shaped, and starts out relatively wide at the top, then tapers to a thin cord once it reaches the femoral region.

The other part of the iliopsoas is the Iliacus. Do this: Hold your hands up in front of you, palms facing you with your pinky fingers an inch apart from one another, and cup your hands slightly. Your hands represent your pelvic bones and within the entirety of that cupped space lies your iliacus. That puts the iliacus on par with the gluteus maximus in terms of muscle volume, so you can see why the iliopsoas has the potential to be a massive power source.

Tight Muscles Are Not Strong Muscles

Unfortunately, for most runners, the hip flexors are not a powerhouse. Instead, thanks to hours and hours spent sitting every day, they’re the source of a lot of tightness and pain.

Try this: Stand with your back and your heels against a wall or closed door. Now, keeping your tailbone and your shoulder blades in contact with the wall, slowly raise one leg as high as you can without bending your knee. Did you get to 90 degrees? If you did, then try it again, but this time, slide a hand behind your lower back and try to maintain the natural curve there, keeping the space between your lower back and the wall intact. Can you flex your hip to 90 degrees without flattening your lumbar spine? Probably not—and you’re not alone.

When you sit in a chair, your legs are passively flexed to around 90 degrees at both the hip and knee joints. Doing so for prolonged periods of time sets this flexed condition as the muscles’ new “default” position, causing the muscle fibers to shorten. Then, when you stand, walk and run, those muscles naturally feel tight because they’re being stretched beyond their new normal. Tight hamstrings inhibit normal function of the hip flexors and vice versa. Adding insult to injury, because the flexion of sitting is passive, the hip flexors and hamstrings also become weaker, and a tight, weak muscle is very prone to injury.

What’s more, that muscle dysfunction puts your body into poor alignment, creating strain on some muscles, and shifting the workload onto others that are now forced to overcompensate. This creates a cascading effect of dysfunction, asymmetry and injury throughout the body.