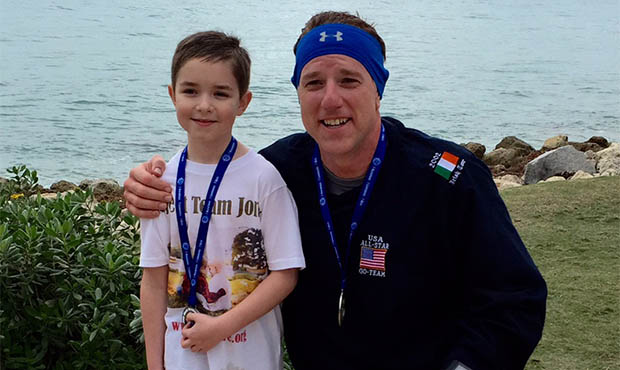 From Jogger to Marathoner

Twenty years ago, Patrick Fallon was a sporadic, self-proclaimed jogger who measured distance not by miles, but by the number of mailboxes he could pass.

That is, until last March when the Texas state representative and former football player received a FitBit from his wife, Susan. The motivational gift appealed to his analytical side.

"I loved crunching the numbers and analyzing the stats the band provided," Fallon says. "It was a great tool to hold me accountable."

Before long, he was regularly lacing up his running shoes and logging miles, enjoying the health benefits that accompanied his newfound hobby. He had no idea what would possibly come next.

Something to Run For

Six months later, Fallon stumbled across an ESPN special about the World Marathon Challenge. In awe of the runners' journey to complete seven marathons in seven consecutive days on seven continents, the now 48-year-old told his wife he would love to join the challenge one day.

Inspiration turned to action later that night when Fallon confronted some Facebook posts he'd been ignoring for far too long. A neighbor had recently been posting updates on her friend's son's battle with brain cancer. As a father of two young boys himself, Fallon hadn't read the posts for fear it would hit too close to home.

But as he read through the timeline of posts that evening, he learned the story of the Illinois-based Wade family, and how one of their seven-year-old twin boys, Jonny, was diagnosed with a rare form of terminal brain cancer. Fallon found himself overcome with the desire to honor the Wade family, and immediately thought of the World Marathon Challenge.

He began researching pediatric cancer charities and contacted the World Marathon Challenge event organizer to see if there was a spot available for the 2016 event. Fallon also got the buy-in of his wife, who was swayed by his desire to raise money and create awareness for the cause.

The jogger-turned-runner-turned activist eventually committed more than $40,000 of his own money to register for the challenge, signing up with only three months to prepare. Fallon also vowed to dedicate 100 percent of the money raised to the Pediatric Cancer Foundation in Jonny's name.