In early January, Facebook CEO Mark Zuckerberg announced a challenge to his 47 million followers: run 365 miles in 2016. He created the group, "A Year of Running" to document his efforts and to provide a platform for others to do the same.

The group took off and currently has over 110,000 members from across the globe. Many of them are already runners who have joined to share their success stories and inspire others.

These are seven of those runners.

Responses have been lightly edited for length and clarity. 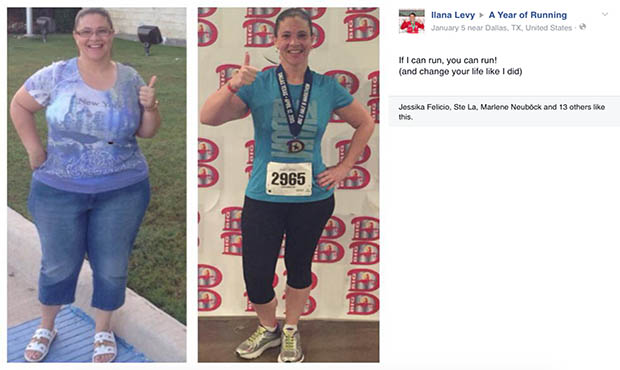 Ilana Levy is a 44-year-old mortgage loan processor for BB&T.

When did you start running?

I started walking about five years ago and decided to try and run some intervals. I started with 30-second jogging intervals, and I thought I was going to die!

Why did you start running?

Six years ago, I registered my family for a one-mile fun run, and it wasn't fun at all. I was obese, and I smoked almost two packs a day. I realized I had to make some changes. First I quit smoking, and later, after gaining even more weight, I started eating healthier and exercising. I have lost over 95 pounds since!

I feel so much better now. I am healthier and happier and, not only that, I found something that I do for me—not for my family, my daughters, my husband or anyone else. Running is for me. I set my goals, I train and I cross those finish lines for me.

It's been an amazing journey, and I have accomplished so much more than I ever imagined I could!

What encouraging words or advice would you give to someone who wants to start running?

If someone is considering running, my advice would be: one day at a time, step by step. Don't get discouraged. Don't let your mind set the limits. Your body is capable of some amazing things you are yet to discover. You don't have to be the fastest—I'm sure not—you just have to keep moving forward. Good luck and see you at the finish line! 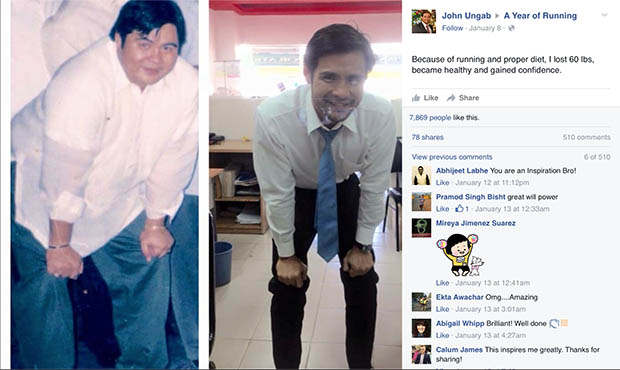 John Ungab is a 42-year-old lawyer.

When did you start running?

Why did you start running?

I started running as part of my conditioning for a lawyers' basketball league and also to lose weight, because I had gained a lot after sustaining an ankle injury. Eventually, as I began to lose that weight, I started to like running even more than basketball.

How has running changed your life?

Physically, running made me fitter than basketball did. Emotionally, I became more patient, calculative and calm. And I gained a lot of friends.

What encouraging words or advice would you give to someone who wants to start running?

Running is the cheapest and easiest of all sports. You only need a good pair of running shoes and off you go. The initial, hardest part is the will to run and the will to do it consistently. Once you acquire the habit of running, it will become a part of your system.