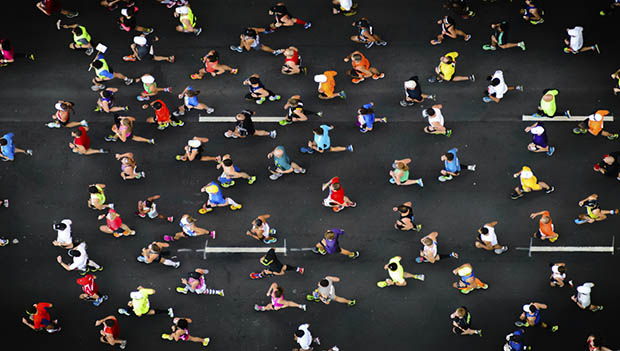 With more races popping up every year, race directors are scrambling to find new ways to bring runners to their events. Here are five cool trends they're using to raise the bar and create the ultimate experience for participants.

For the socially conscious and environmentally responsible, there are a number of races that offer the opportunity to truly leave no trace. While this is not a new concept—the Port Perry Half Marathon and 5K in Ontario, Canada, went carbon neutral way back in 2009—the trend has caught on and spread to some big-time venues. Last year's Sanlam Cape Town Marathon in South Africa managed to stay carbon neutral while hosting more than 12,000 runners. In the U.S., smaller races are doing their part to go green as well, with the Marin County Half Marathon/10K/5K in California and the Trail Mix 25K/50K in Minnesota making notable efforts to go green. These efforts include using solar energy, green portable toilets, and recycled materials for race shirts.

These days, building a user-friendly website and having plenty of volunteers on-hand during race weekend merely meets runners' expectations. To go above and beyond, race directors are coming up with creative ways to roll out exceptional customer service from registration through race day. One of the most innovative ideas is the MilestonePod training concept employed by organizers of the Pittsburgh Marathon. Two thousand of the devices will be given out at no cost to registered runners on a first-come, first-served basis at the time of registration. Runners can use the device and corresponding mobile app to get useful feedback on their stride and form and make corrections to improve running efficiency as they train for the big day.

Participants can also measure their stats against other Pittsburgh Marathon MilestonePod users, ranking themselves in categories like most efficient stride and fastest pace.

If you’re not a fan of big, clunky aluminum finisher medals, you could shell out the $200 entry fee for the San Francisco Nike Women’s Half, where every finisher receives a Tiffany & Co. necklace instead.

And if bling isn't your thing, there are other races partnering with big-name sponsors to provide singular experiences. At the 2015 Pittsburgh Marathon, event sponsor Dick's Sporting Goods erected replicas of city bridges at the expo center. The expo also featured elevated spaces, "islands" instead of booths and lounge areas complete with sofas. Pittsburgh Marathon race director, Patrice Matamoros, says she and her staff partnered with sponsors to create an environment that was "more like a Nordstrom’s shopping experience, not a flea market."

A Posh Pre- and Post-Race Experience

If milling among the masses puts a damper on your race experience, perhaps you should consider upgrading to VIP status. The majority of big races are offering at least one version of these special treatment packages to a limited number of runners who are willing to pony up the extra dough. The number and level of perks varies with the amount paid, but runners can generally pay anywhere between $59 and $299 to skip lines at every point from packet pickup to the starting corral, use indoor bathrooms, eat catered pre- and post-race meals, enjoy a post-race massage and more.

In some cases, private firms are even offering VIP packages that guarantee late entry into races that typically sell out more than a year in advance. One example: Lodging plus race entry packages for the New York City Marathon are available starting at $1,049 through Massachusetts-based Marathon Tours & Travel.

Want your friends and family to be able to follow you on race day from anywhere in the world? There's an app for that. The New York City, Chicago and Amsterdam marathons—among others—have all rolled out comprehensive apps specific to their own events. All three apps were developed by Tata Consultancy Services. Ratings to date have been mixed, but as new developers enter this as yet underserved market, fans can expect to have a much better virtual cheering experience than is available with the current SMS technology.