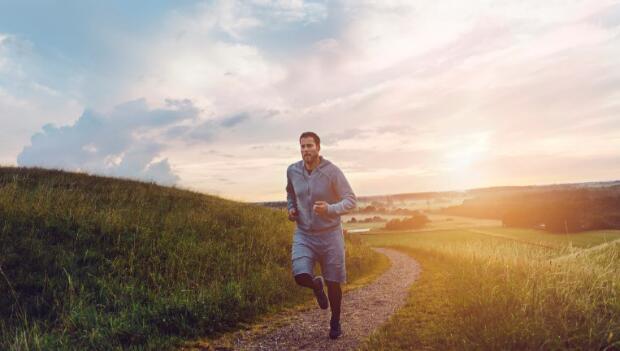 Trails are as different and individual as the humans who run them. Some are in extraordinary settings, others exist as snaking oases in the midst of urban sprawl. What makes a trail especially worthy of a run depends on what criteria you consider important. Do you prefer dusty canyons? Wildflower meadows? Lush forests? Mountain ridges? You'll find all of these options, and many more, in this curated collection of America's best trail running destinations.

Eugene, Oregon
This twisty 27-mile trail follows the McKenzie River as it winds through ancient forestland in the heart of the Cascade Mountains. The route includes smooth single-track trails, log bridges, hairpin turns, and steep climbs and descents as it traverses over former lava fields, under fallen trees, and past hot springs and blue pools. The trail's diverse beauty is a big reason the early September McKenzie River Trail Run 50K sells out quickly, and why this has also been hailed the number-one mountain biking trail in the country.

LaGrange, Wisconsin
Once completed, the Ice Age National Scenic Trail will be a 1,200-mile route across Wisconsin, highlighting the state's vast quantity of geological features created by ancient glaciers. In the meantime, some of the best places for runs on the 600 miles of existing segments are through the rolling terrain of the Kettle Moraine State Forest near LaGrange, where you'll find a mix of evergreen and deciduous groves interspersed with prairies, ponds, marshes, and kettles left behind by long-ago ice floes. Another good access point is just south of Madison, where the trail coincides with the Sugar River State Trail and meanders through wetlands, shaded forests, and remnants of ancient prairies.

Ohiopyle, Pennsylvania
The Laurel Highlands Trail is a 70-mile, continuous dirt footpath stretching across the Laurel Ridge in southwestern Pennsylvania. As it winds from Ohiopyle to Seward, the trail occasionally emerges from the forest to grant excellent views of the twisting Youghiogheny River. It's also the setting for one of the older ultra-distance trail races in the U.S., the 70.5-mile Laurel Highlands Ultra Race, which dates back to 1980.

Springer Mountain, Georgia, to Mount Katahdin, Maine
Spanning 2,179 miles and passing through 14 states, the Appalachian National Scenic Trail—known as the AT—is perhaps America's most celebrated trail. It gets notoriety from elite ultrarunners who run the AT from end to end (the current record is under 48 days), but it's also a daily stomping ground for millions of runners up and down the eastern U.S. Best yet, the AT is easily accessible to several large populations, with great running sections near Knoxville, Tennessee; Roanoke, Virginia; Harper's Ferry, West Virginia; and Harrisburg, Pennsylvania.

Issaquah, Washington
Every urban area should be blessed with a trail running sanctuary as sublime as Cougar Mountain Regional Wildland Park. Preserved in 1983 by King County, the 3,100-acre park on the outskirts of Seattle boasts 36 miles of soft, rolling trails that meander through the lowest and westernmost of the "Issaquah Alps" highlands. Starting from one of the four main trailheads, a creative trail runner can link a variety of twisty-turny loops to create a run of just about any length and difficulty, though all are certain to include cascading waterfalls, lush fern undergrowth, foot bridges over bubbling creeks, massive glacial boulders, and several scenic viewpoints (and perhaps also long-closed mine shafts, Cold War missile silos, bobcats, and black bears).

Kauai, Hawaii
No postcard can do justice to the experience of running the Kalalau Trail, the only land access to the spectacular Na Pali Coast on the northwest side of the Hawaiian island of Kauai. First built in the late 1800s, the 11-mile trail begins at Ha'ena State Park and traverses five lush valleys before reaching its terminus at Kalalau Beach. Along the way, the trail offers up towering sea cliffs, remote waterfalls, white sand beaches, and guava trees, as well as ancient Hawaiian ruins. It takes a strenuous effort to complete an out-and-back run, but a truncated version to Hanakapi'ai Beach (2 miles out) or Hanakoa Valley (4 miles) still offers plenty of Na Pali grandeur.
NEXT