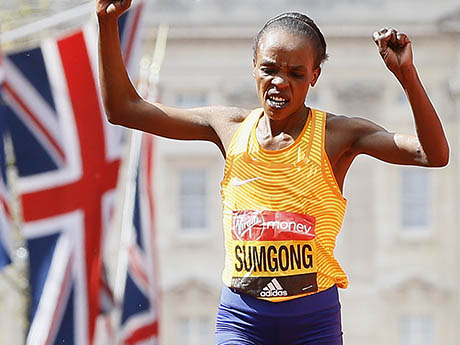 On a record-setting day in England's capital city, 39,140 runners took to the streets for the 36th running of the Virgin Money London Marathon.

The day turned out to be one for the books, as 32 Guinness World Records were set—including fastest marathon dressed as a lobster and fastest three-legged marathon.

Following up on his 2015 London Marathon win, Kenya's Eliud Kipchoge crushed the course record by more than 30 seconds, while narrowly missing a world record. His winning time of 2:03:05 was only eight seconds short of Dennis Kimetto's 2014 Berlin Marathon time (2:02:57). 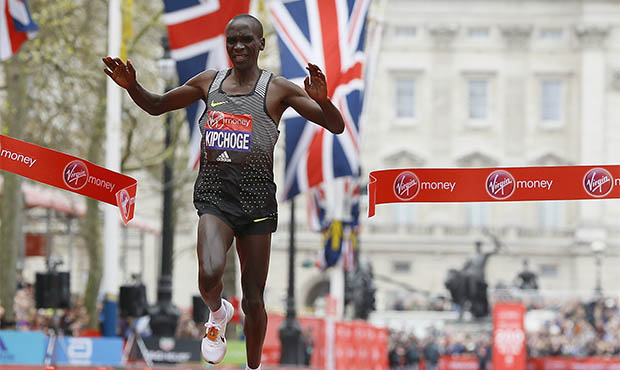 Second-place finisher Stanley Biwott of Kenya broke his own personal record for a marathon, clocking a 2:03:51 finish. Rounding out the podium was Ethiopian Kenenisa Bekele, who finished third with a time of 2:06:36.

The women's winner, Jemima Sumgong of Kenya, certainly earned her medal, battling back from a nasty head-over-heels fall to outpace the crowded elite field.

As the women neared a water station, Ethiopian Aselefech Mergia clipped the back of Sumgong's heel, bringing them both to the ground, along with Kenyan Mary Keitany. 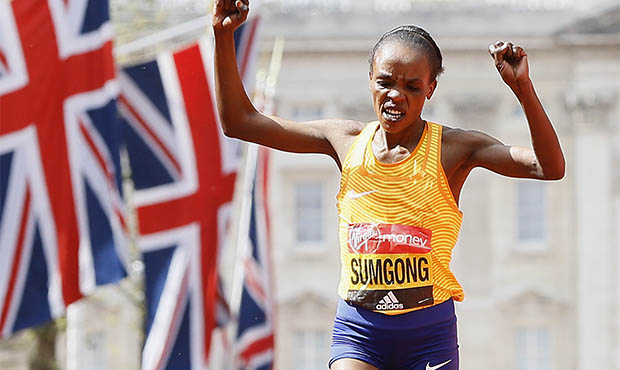 After Sumgong and last year's winner, Tigist Tufa of Ethiopia, broke free from the pack with about two miles to go, Sumgong beat out the defending champion by five seconds to take the women's title with a time of 2:22:58. Kenya's Florence Kiplagat crossed the finish line in 2:23:39, clinching the third place medal.

Despite being forced to drop out of the U.S. Olympic Marathon Trials in February, American Sara Hall finished with a personal best time of 2:30:06, coming in 12th place.

The race's wheelchair winners also proved their dominance in the sport on both the men's and women's side. Swiss Marcel Hug took the men's wheelchair title a mere six days after winning the Boston Marathon, sprinting to a narrow win with a time of 1:35:24. American Tatayana McFadden, who also won the Boston Marathon the previous weekend, beat Swiss racer Manuela Schar by one second to secure her fourth consecutive London Marathon win (1:44:14).