A Short History of Camping 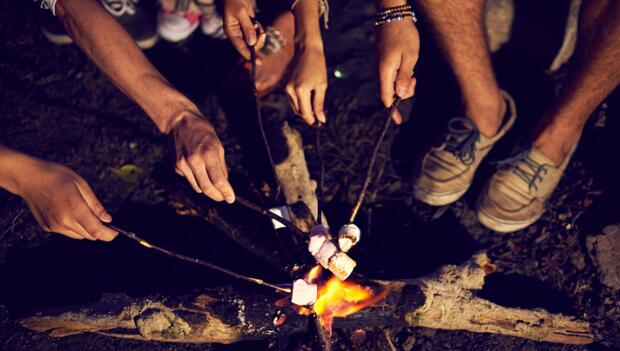 Every summer more than 42 million Americans turn to the wilderness seeking escape, however temporary, from the drudgery and stress of everyday life. They go camping. Fortunately, not all at the same time.

How did the idea of voluntarily leaving a comfortable home to sleep on hard ground under the stars and cook food over a smoky fire come about? And where did all the neat gear we use come from?

Here is a short history of camping.

The History of Campgrounds

Set aside human migration and great armies on the march--activities which have taken place for thousands of years-- and here's how modern day camping got its start.

1861 - Gunnery Camp is founded in Washington, Connecticut, by Frederick Gunn, who owned a boys' school. Taking his wards on a two-week trip, they hike to a specific wilderness area where they set up camp. Activities include hiking, fishing, and observing nature, and of course, cooking over a smoky fire.

1874 - The YWCA establishes its first camp in Pennsylvania. Called "Sea Rest," the camp catered to women only.

1885 - Surprisingly, it took men 11 years to realize that camping could be fun and set up a YMCA camp in New York. That camp is still in operation today.

Over the ensuing years, the concept of camping steadily grew.

1900 - The first Boys' Club camp is built in Salem, Massachusetts.

1910 - The Boy Scouts of America establish a camp in New York.

1930s - The National Park Service develops 34 Recreation Demonstration Areas, a complex government name for campgrounds, which are later turned over to state agencies.

Today - There are over 113,000 federally managed campsites, more than 166,000 campsites in state parks, and an untold number of private facilities.

The History of Camping Gear

Eons before becoming our favorite pastime, camping was, literally, a way of life. And perhaps the most important piece of iconic equipment is the tent.

1855 - The real ancestor to today's familiar shelter is designed by a U.S. Army officer. He modeled his "bell tent" after Native American teepees, using canvas instead of buffalo hides.

1911 - The first Boy Scout Handbook is published and shows 10 different types of tents.

1945 - WWII is over, and the post-war economic boom sends Americans to camping retailers and war surplus stores where they purchase thousands of tents of all types before heading off the great outdoors.

1990 - The first "truck-tent" appears, designed to be pitched in the bed of a pickup truck.

Pushing back the darkness with a wide assortment of configurations and technologies.

1905 - W.C. Coleman develops a liquid fuel lantern with a small base tank that is pressurized using a hand pump. It offers campers a safer, more enjoyable experience, with brighter illumination and no sooty smoke.

This same principle is still in use today, with factory-pressurized fuel bottles replacing the pump. Over the years, battery-powered lanterns joined the mix and today utilize brilliant LEDs for exceptional energy efficiency.