What Runners Should Know About Protein 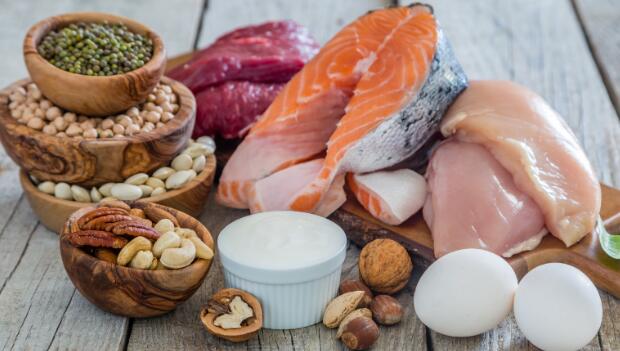 Every runner knows they need carbs, but protein is just as crucial to muscle recovery after a workout. It repairs muscle damage, diminishes the effects of cortisol—the so-called "stress" hormone that breaks down muscle—and, when taken with carbohydrates, speeds your body's ability to replenish its glycogen stores, your all-important energy source for those long runs during marathon season. If you've ever "hit the wall" or "bonked" in a marathon, you know what it feels like to deplete your glycogen reserves.

To gain the full benefits of protein's power, most sports dieticians and nutritionists recommend getting 10-20 grams of protein within 30 minutes of finishing a run, and some say even sooner—that's when your muscles are the most receptive to a helping hand.

More: How Much Protein During a Workout?

The amount of protein you eat matters; 10 grams is a baseline and 20 grams is optimal, according to Deborah Shulman, who holds a doctorate in physiology. Much more protein than that won't do you any good. A 2009 study published in the Journal of the American Dietetic Association found that consuming more than 30 grams of protein in a single sitting didn't help muscles any further than more moderate amounts. Call it the 30/30 Rule: eat less than 30 grams of protein in less than 30 minutes post-run.

What kind of protein is best? The folks at the Harvard School of Public Health recommend fish, poultry and beans. Sure, a big juicy steak will do the trick, but it comes with a price: loads of saturated fat. A 3-ounce serving of salmon (about the size of a deck of cards or a woman's palm) gives you 17 grams of protein and only 2 grams of saturated fat. Beans do fish one better: a cup of cooked lentils has 18 grams of protein and less than 1 gram of fat.

Don't have the time or inclination to cook up a meal? Many athletes fuel post-run with a smoothie or protein shake. Just be sure to watch those protein amounts—some shakes carry a wallop. According to dietician Matthew Kadey, excess protein, like excess everything else, can be converted into fat.

Be sure to hydrate and eat plenty of carbs too. Remember, carbs and protein work together to replenish your glycogen stores more efficiently. The jury is still out on the ideal ratio of carbs to protein, but most sports nutritionists say to aim for a 3:1 or 4:1 ratio for your post-run meal, especially when you've run for an hour or longer.

More: Are You Eating Enough Carbs?

Here's a handy formula from Running Times magazine to figure out how many carbs you should be eating at mealtime: divide your weight in half. That's your magic carb number. You can extrapolate your protein intake from there by dividing that number by three or four.

And when in doubt, just remember the 30/30 Rule: eat less than 30 grams of protein in less than 30 minutes after a run.

Eat right and perform better. Find a nutrition plan for you.