The Best Natural Fuel for Runners 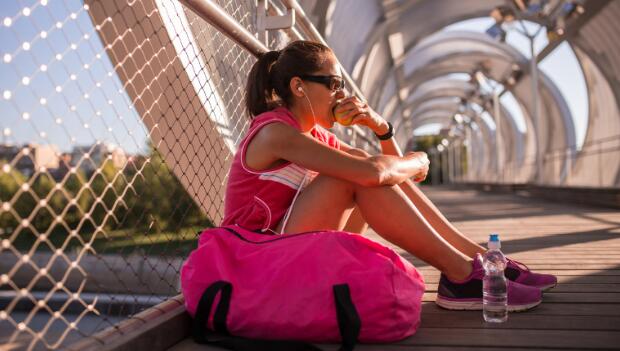 Before sports drinks, bars and neon GU became race day staples, athletes tapped the produce, bread and dairy aisles for a competitive edge. Sure, sports supplements are convenient, but real food can be just as beneficial—pre-, mid- and post-workout—to power your stride and speed recovery. In fact, eating the right edibles is like flipping a switch that tells your body to run harder, faster and longer.

If you find yourself unsure about what the best options are, here's an arsenal of natural fuel choices distilled from top sports dietitians.

Need to Know: A study in the International Journal of Sports Nutrition and Exercise Metabolism suggests that consuming a low glycemic meal three hours prior to a run will give you better endurance than those who consumed a high glycemic meal. The Glycemic Index refers to the rate at which foods cause blood sugar to rise after you eat them. Those that cause a slow rise increase fat burning during exercise, preventing performance-sapping drops in blood glucose and muscle carbohydrate stores.


Eat This: Oatmeal topped with walnuts and hard-boiled egg

More: How to Fuel Your Body for Energy

How Come: The slow-releasing carbs in whole-grain oatmeal will provide an energy source during exercise, says Leslie Bonci, RD, a runner and director of sports nutrition at the University of Pittsburgh Medical Center.

Whole grains such as brown rice and old-fashioned oats have a lower glycemic index than processed carbohydrates like white rice and refined pasta.

"The protein from the egg and the fat in walnuts slows digestion, which lowers the glycemic index of the meal further," Bonci says.

Brownie Points: A 2009 Journal of Nutrition study reported that women with higher intakes of nutrient-packed whole grains have lower amounts of total body and abdominal fat.

Need to Know: Researchers from Greece discovered that runners who consumed simple carbohydrates 15 minutes before using a treadmill were able to run 13 percent longer than subjects who took in nothing.

"Fast-digesting carbohydrates that are low in fiber provide working muscles with a quick influx of carbohydrate energy so you can run farther," says Bonci, adding, "A small snack before a run also helps stave off hunger during exercise."

Eat This: Low-fat yogurt with a handful of raisins

More: How to Fuel During and After a Workout

How Come: San Diego State University researchers found those who consumed the same amount of quick-digesting carbohydrates from raisins or a sports gel 45 minutes prior to endurance exercise experienced a similar benefit to performance. Soft yogurt is a smart choice if you suffer race day butterflies.

Plus, a little bit of protein before activity speeds post-exercise muscle recovery, according to several studies.

Brownie Points: According to a 2008 British Journal of Sports Medicine report, distance runners who ingested daily doses of probiotic bacteria, similar to that found in yogurt, fell sick half as often as a group taking a placebo.