How to Lose a Beer Gut Without Giving Up Beer 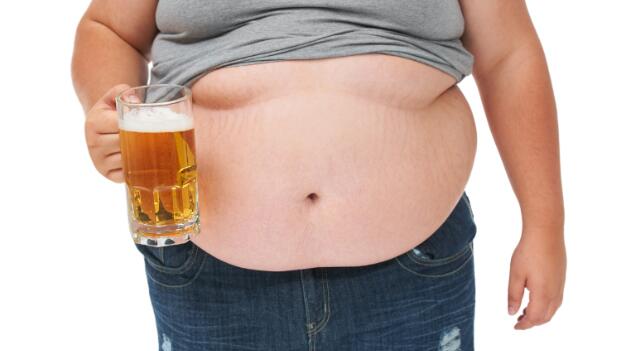 MEDFORD, Mass. -- To get rid of excess body fat, be it in the form of a "beer gut," "love handles," or "cottage-cheese thighs," you've got to burn it off. And there simply is no good way to "spot reduce."

Just like crunches on their own won't make your waistline any smaller, leg-lifts aren't going to get rid of cellulite. If you're serious about trimming up any part of your body and keeping it that way, you've got to burn more energy than what you take in as calories in food.

Weight-loss doesn't always mean giving up your favorite foods or alcoholic beverages. Rather than decreasing your caloric intake through dieting, why not increase your caloric output by boosting your metabolism?

Going on a diet may actually be counterproductive to long-term weight control because your body reacts to a decrease in caloric intake by slowing down your metabolic rate. Extra fat in your trouble spots will cling to your body even more stubbornly in the face of a slowed metabolism.

The key to getting rid of excess fat without having to eat like a bird or to swear off beer is to become a lean, mean, fat-burning machine. Here's how:

Strengthening muscles by lifting weights is the number one way to boost metabolism. Muscles burn more calories than fat whether they're being used or not.

A study at Tufts University compared women on identical diets. The women who trained with weights lost 44 percent more fat than women who only dieted. Another Tufts study showed that after 12 weeks of weight training, resting metabolic rates increased by 15 percent. This means that if you increase muscle tone, you will burn more calories all day.

Even avid fitness enthusiasts often make the critical mistake of focusing on aerobic activities such as running when their goal is fat loss. When stretched for time, many of us have to choose between aerobic exercise and lifting weightswhat we often don't realize is that better results would be achieved if we didn't skip the weight lifting.

To get the most bang for your buck from lifting weights, you should focus on legs, which represent 60 percent of total muscle mass. Don't be discouraged if the number on the scale doesn't automatically go down when you start a strength routine; you'll be losing fat and replacing it with lean, sleek muscles that weigh more.

Women who lift weights will not bulk up like men. Many people, men and women alike, shy away from lifting weights, thinking they need to lose weight before they build muscle. But, unless you use steroids, you're not going to end up looking like one of those models you see in muscle magazines. And weight training is the best opportunity for revving your metabolism the best way to keep trim long-term.

Another study at Tufts showed that kids who skip breakfast are more likely to be overweight than kids who don't (the same may be true for adults). Although you may think you're saving your calories for later on, you're not. When you eat breakfast, it signals your metabolism to keep running. But when you don't eat breakfast, your metabolism drops, and the calories you eat later are now more difficult to burn.

Rather than take the time to exercise or overhaul your lifestyle, you can incorporate metabolism-chargers into your everyday routine. Something as simple as swearing off elevators or escalators can add up to significant calorie-burn over the course of a year. Some estimate that if all you did was take the stairs, instead of the escalator, you could lose up to 6 pounds in a year. Ride your bike to work or class. Walk rather than taking the shuttle. Take a walk around the block when you need a quick break.

Controlling stress is a surprisingly important factor in optimizing metabolism. When we're stressed out, over-worked, and under-slept, we will have hormonal imbalances that increase the production of cortisol, a powerful appetite stimulant that will cause us to overeat and store fat. There is a lot of evidence to support the notion that people should continue to do the things they enjoy and eat the foods they love (in moderation of course), without getting all stressed out about it.

And you just might do your heart a favor and stave off a heart attack later on if you have one or two drinks now.

In Germany, researchers have shown that beer drinking is associated with a decreased risk for heart disease. But according to Tufts researcher, Dr. Jose Ordovas, this is most likely due to the "celebratory effect." That is to say, because Germans tend to drink beer socially and have a good time, they experience health benefits from the reduced stress that accompanies such activities.

Get Your Good Fats

Essential fatty acids are fats considered essential to life because the body can't produce them on its own. These fats sometimes referred to as omega 3sare essential to producing many hormones, some of which work to maintain the body's metabolic rate.

Most typical diets fall short of adequate essential fatty acids. A deficiency, in theory, is likely to increase cravings for high-fat foods while simultaneously slowing down your metabolism a bad combination.

Good sources of essential fatty acids include nuts, canola oil, and fish, especially cold water fish such as salmon. Go for salad dressings in a canola oil base to get your omega 3s and just enough fat to turn off hunger cues.