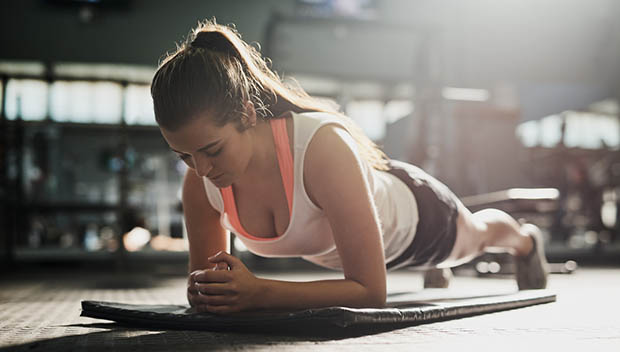 If the word "core" conjures an image of a sculpted waistline with six-pack abs, that's only part of the picture. If you're like most people, you probably focus primarily (or only) on your abdominals when working your core. But having this narrow view can be detrimental to the rest of your core, making you weaker rather than stronger, and leaving you vulnerable to injury. Switching to a total core workout that targets not just the abdominals but also your spinal stabilizers, obliques and hips can remedy that.

Get to Know Your Core

Your core includes the four muscle groups of the abdominals—the rectus abdominis, internal and external obliques and the deeper transverse abdominis—but also more than a dozen other muscles of the pelvic floor, hips, glutes, spinal stabilizers and lower back.

Working together, these muscles are responsible for stabilizing your body during every single movement you perform. That's why an imbalance can be such a liability: A strong core is not only essential to athletic performance, it's also crucial for healthy, pain-free function as you go about your day. So rather than isolating individual core muscles, you should incorporate total core exercises into your exercise regimen.

Here's a quick but effective total core workout you can do a few times a week to shore up poor posture, fix misalignment issues and make all of your movements stronger and more efficient.

If you think of the plank as a static exercise that works your abs, let us introduce you to the real plank. Done properly, this exercise works not only the rectus abdominis (that six-pack) but also targets the pelvic floor muscles, the lower back's quadratus lumborem (QL), the long spinal stabilizers, your glutes and even the large muscles of your upper back and legs.

Start in a high plank, hips in line with your shoulders and ankles—not tenting up above or sagging down below. Now pull your toes hard toward your shins, solidifying your lower legs. Squeeze your thighs, both the front (quadriceps) and back (hamstrings). Next, imagine sliding your hands down toward your hips. This will activate the latissimus dorsi and light up your abs. Finally, activate your pelvic floor and "make a fist" with your glutes by squeezing them as hard as you can. Hold for 15 or 20 seconds. That, my friend, is a plank.

The Superman is a lower back exercise popular in many core classes. But, like the plank, with this one you get out of it what you put in. By slowing down the movement and adding minor variations to foot placement and arm movements, this simple exercise can target your qlutes, spinal extensors, QL, trapezius and the posture muscles of the upper back and shoulder girdle.

For a regular Superman, lie face down on a mat, arms stretched overhead. Slowly raise both arms and feet about six inches off the floor, pause for one to two seconds, then slowly lower to the floor. Even with this simple version, there's a lot you can do to challenge yourself. For starters, go very slowly, forcing your back muscles to lift the weight of your arms and legs. Don't use momentum on the way up, and don't just flop down.

When 10 or 15 of those begin to feel easy, challenge yourself by keeping your toes on the floor while arching and reaching your arms up as high as you can (still with no momentum/flopping). Next, hold that up position for a few seconds as you spell the letters I, Y, W and T with your arms. This really engages the upper back and posture muscles. Do 10 to 15 reps.

Core strength and stability is most important when we're under a heavy load, so it's important to do more than just bodyweight exercises. Heavy goblet marches engage the trapezius, QL and smaller spinal stabilizers, the transverse abdominis, rectus abdominis and pelvic floor while the hip flexors fire to move the legs.

Hold a heavy kettlebell or dumbbell at chest height in the goblet position (round bell cupped in the palms of your hands). Keep your chest open and your shoulders back by squeezing the muscles between your shoulder blades. Next, engage your pelvic floor, tighten your inner core, and perform very slow, high marches for 20 to 30 seconds.

Where heavy goblet marches moved the lower body while keeping the upper body and torso rigid, seated sprinting arms does the opposite. It's a wonderful exercise for not only strengthening the hip flexors, back extensors and oblique abdominals, but it also increases mobility through the shoulders and thoracic spine.

Sit on the floor with legs straight in front of you. Without letting your lower back round, pull hard with your hip flexors so you are sitting tall and perfectly upright. Now, slowly start moving your arms back and forth in a running motion. Allow just a bit of swivel in your spine, but don't let your arms cross the midline of your body. As you feel your torso loosening up, move your arms faster and faster until you are pumping them at sprinting speed. Be sure to keep your hip flexors and lower back engaged so you maintain a rock-solid platform throughout. "Sprint" for 20 to 30 seconds.

No core workout is complete unless it works the hip complex because weak hip muscles can contribute to postural issues and a host of sports-related problems. To strengthen those muscles, it's important to move them in all directions against resistance. This is easy to do with a short, looped band.

Start with the band just above your knees and perform 10 side shuffle steps in each direction. Feel free to throw in a squat with each step.

End your hip work by lying on a mat on your side, the band still just above your knees, and do 10 clamshells on each side: With knees bent 90 degrees, "open the clamshell" by moving the top knee up toward the ceiling. Keep the movements for all hip exercises slow and controlled for maximum effect.

Doing two circuits of these total core exercises three times per week can correct postural imbalances, strengthen key stabilizers and give all of your athletic endeavors a serious power boost.