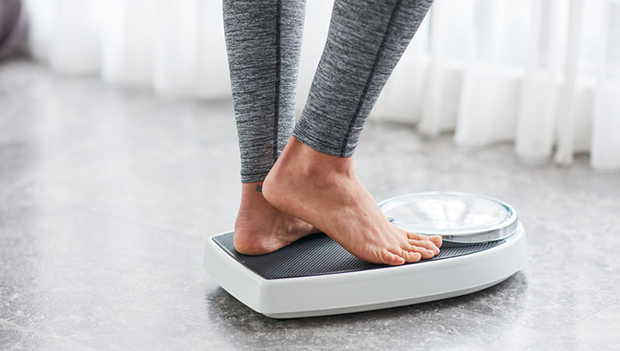 When you wake up and see a larger number than expected on the scale, it's tempting to panic. However, weight fluctuations are unlikely to be true fat gain and usually relate to high water retention in the body. Take a look at these reasons you may be seeing some "fake" weight on the scale due to water retention.

You've been a bit heavy-handed on the salt.
A liberal sprinkling of salt has the power to transform many meals from flavorless to fantastic, but it also has the power to add a couple pounds to the scale. Sodium causes cells to hold extra fluid, and you can expect to see that extra fluid on the scale. Drinking water helps flush out the extra sodium, allowing your body return to its normal state.

Last night was pasta night.
Many athletes know how to spot the signs of a successful carb load–their pants are tight, they feel puffy and the scale is definitely up. Consuming a meal (or several) high in carbohydrates can lead to a temporary increase on the scale, because the body stores two to three grams of water with every one gram of carbohydrates stored as glycogen. You might not notice much weight fluctuation if you consume a steady amount of carbs on a regular basis, but a sudden increase on the scale after a high-carb meal is possible.

Yesterday's workout was a doozy.
You killed it during yesterday's workout, but instead of the scale reflecting your efforts, you find you've actually gained weight overnight! What gives? During challenging exercise, microtears occur in muscle fibers, and the body has to repair those tears to rebuild muscle and make you stronger. As part of the rebuilding process, the body produces an inflammatory response that sends fluid to areas under repair. This fluid obviously weighs something, and that's what may be reflected on the scale. Refueling properly with plenty of water and a full, balanced diet can help reduce the inflammation.

You are stressed out.
If you've been stressed out about something in your life, it's not uncommon to see the scale jump a few pounds. Before you panic that those pounds are there to stay, be aware that stress increases the body's production of cortisol, which directly influences fluid retention and water weight. Stress, and in turn cortisol can release a hormone in the body known as ADH (antidiuretic hormone) that controls water balance. This means your body may retain more water, making that number on the scale higher than usual. Controlling your stress can help maintain normal levels of cortisol and ADH, which will help normalize your fluid balance.

You are skimping on sleep.
If last night's lack of sleep has you reaching for that third cup of coffee, be aware it might wreak havoc on the scale as well. Like stress, sleep and cortisol production go hand-in-hand, so your body may increase production when fighting fatigue. Do your best to maintain a regular routine of quality sleep (most adults need seven to nine hours per night) to help your body return cortisol levels to a normal range and shed any extra water weight. Keep in mind that while one two nights of poor sleep may cause temporary water retention, chronic sleep deprivation can result in a more permanent increase on the scale.

You indulged your sweet tooth.
Sugar increases water weight in the body. A large sugar intake raises insulin levels, which inhibits the body's ability to expel sodium, forcing the body to retain more water in an effort to keep the sodium/water balance in check. Sugar is also a carbohydrate, which circles back to the glycogen/water storage issue. So while you may feel like that slice of cake you ate last night caused you to suddenly gain a few pounds, the weight fluctuation is likely caused by water.

READ THIS NEXT: The One Crucial Exercise You Need in Your Routine