7 National Parks Where You Can Escape the Heat This Summer 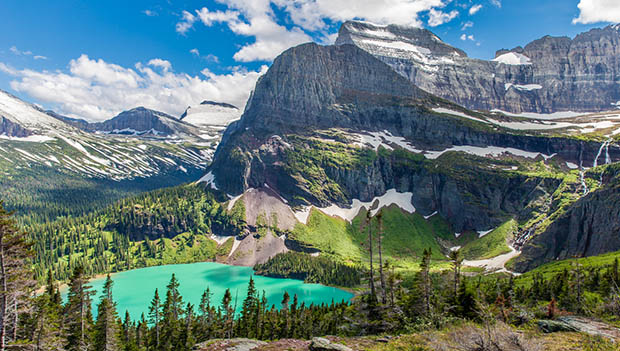 If you live in an area of the country that experiences intense summer heat, it may feel like the high temperatures and humidity will never end. When the heat gets to be too much, pack your bags and head to one of our nation’s national parks. While some parks should be avoided during the height of summer (Death Valley, anyone?) others have great summertime weather or are only fully accessible in the summer. Below you’ll find seven national parks perfect for escaping the summer heat.

Glacier National Park is most popular in the summertime, and there’s a good reason why. Because of its high altitude, the park experiences snowfall that continues late into spring and begins again early in the fall. That leaves a short window of full accessibility in the park, including access to its famous Going-to-the-Sun Road, which typically doesn’t open until mid-June or sometimes even as late as mid-July. To experience all of the hiking, biking, rafting and boating opportunities that Glacier and the surrounding areas have to offer, plan your trip to the park in the warm summer months.

The fifth highest peak in the contiguous United States, Mount Rainier is an ‘episodically active’ volcano, meaning that while the peak is quiet now, it is expected to erupt again some day. The park is popular with hikers, climbers, cyclists and anglers, and the best time to visit is in the summer when the typically intense snowfall takes a periodic break and the wildflowers bloom on the flanks of the mountain. Though the park is open all year long, many of the roads are only open from May until early October, so take advantage of the warm summer days and head to Mt. Rainier before the snow starts to fall once more.

Home to 415 square miles of snowcapped peaks, alpine lakes and dirt-packed hiking trails, Rocky Mountain National Park is a sight to behold. The park has the highest paved roads of any national park in the United States, and the tallest of them all is the Trail Ridge Road, which crests at 12,183 feet. Weather can change rapidly up there, but the chance of snow is less likely during the summer months (though there is an increased chance of thunderstorms). Summer days often reach the 70s or 80s and drop to the 40s at night—the perfect hiking and camping weather. If you can tolerate cooler weather, autumn is also a great time to visit because the weather is typically dry except for the occasional early snowstorm, and the Aspen leaves begin changing color.

While there’s no denying that the weather in Kentucky in the summertime is hot, muggy and often uncomfortable, the magic of Mammoth Cave National Park is that the temperature below ground stays steady at around 54 degrees no matter what’s happening outside. That makes the world’s largest cave system a great place to visit during the dog days of summer, when temperatures above ground can reach 90 degrees and beyond. Take note that the best way to experience the underground wonder of Mammoth Cave is to participate in a tour. While reservations for cave tours are not required, they are recommended, as tour tickets can sell out fast.

Located in the notoriously rainy Pacific Northwest, North Cascades National Park is home to temperate rainforests, snowcapped mountains and over 300 glaciers. The best weather in the park occurs between mid-June and late-September, and snow has usually melted from all but the highest trails by July. Because of the weather, many of the park’s information and visitor centers are only open during those months, so to get the full park experience, plan your visit over the summer.

Home to the tallest trees on earth, as well as nearly 40 miles of Pacific coastline, wild rivers, giant ferns and a lush, green landscape, Redwoods National Park can be savored at any time of year. While temperatures generally remain a mild mid-40s to mid-60s year-round, October through April brings an impressive amount of rain—about 60 to 80 inches every year. To avoid a soaking, head to Redwoods National Park during the summer months when the rains retreat but the fog comes rolling in, cloaking the giant trees in a shroud of mystery and beauty.

There’s perhaps no place wilder in the United States than Denali National Park, made up of six million acres of land and accessible only by Denali Park Road, a single road that stretches 92 miles through the park. During the summer months, private vehicles are allowed to drive the first 15 miles of Denali Park Road to Savage River. Along the way there are numerous pullouts where lucky visitors can snag a glimpse of Denali, the tallest mountain in the United States. To experience more of the road, private buses (some of them transit and others tour) shuttle visitors to other locations along Denali Park Road during the summer months. Keep in mind that it can snow even during the height of summer here, so come prepared by wearing layers of clothing and carrying an outer shell to keep you warm.

READ THIS NEXT: 5 of the Best National Parks to Visit With Your Kids This Summer