The Great American Rail-Trail Is Coming to the U.S. 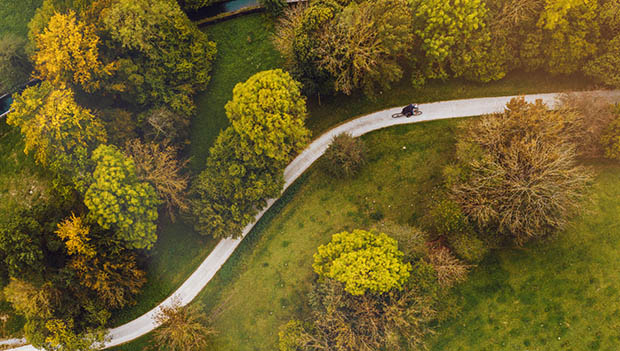 Cycling across the country is no easy feat. From the sun-pumped plains of the Midwest to the lung-squeezing climbs over the Rocky Mountains—coast-to-coast cycling is an adventure that many dream of but few attempt.

But that may change with the addition of a new coast-to-coast, car-free bike route called the Great American Rail-Trail . The Great American Rail-Trail is the brainchild of the Rails to Trails Conservancy, a non-profit that works with communities to turn unused rail corridors into multi-use paths across the country. When the non-profit was founded in 1986, only a few rail-trails existed in the United States. Today, there are more than 23,000 miles and 8,000 more miles in the planning stages. In fact, the planned route of the Great American Rail-Trail, which will link major rail-trails to one another, is now 50-percent complete, a milestone that the Rails to Trails Conservancy has long considered the threshold for committing to the project.

The Great American Rail-Trail will cross 12 states and span 4,000 miles from Washington D.C. to Washington State, connecting over 125 trails, greenways and multi-use paths to provide an American cycling experience unlike any other. It's an adventure that proponents say could rival the national pride Americans hold for the National Parks and for long-distance footpaths like the Appalachian Trail.

The complete vision of the Great American Rail-Trail will be unveiled in May. Right now, the conservancy has named 12 gateway rail-trails that will be linked to complete the full 4,000-mile trail. Those gateway trails are already open to the public, and the conservancy is now working to link them together by helping local trail builders and states find the funding to complete the missing links. When complete, the Great American Rail-Trail will serve more than 50 million people living within 50 miles of the route and endless others who will seek out the nationwide path as a destination.

Advocates say that the Great America Rail-Trail may encourage more people to climb into the saddle because the dedicated car-free trail will make riders feel safer.

Of course, people have been riding their bikes across the country for decades. The TransAmerica Bicycle Trail was officially established in 1976 when cyclists rode their bikes from Astoria, Oregon, to the Chesapeake Bay, on a route that was developed and mapped by Adventure Cycling Association. The inaugural ride on the TransAmerica Bicycle Trail was dubbed the "Bikecentennial" because it correlated with the bicentennial of the United States.

The difference between the TransAmerica Bicycle Trail and the Great American Rail-Trail is that the former is on country roads and two-lane highways where cyclists must share the roads with cars. Advocates say that the Great America Rail-Trail may encourage more people to climb into the saddle because the dedicated car-free trail will make riders feel safer. The trail is not just for cyclists though, as walkers, runners and equestrians will also have access to the trails.

The Rails to Trails Conservancy reports that strong local and state enthusiasm for a coast-to-coast bike trail, as well as a nationwide uptick in interest around cycling, makes now the perfect time to move forward with the Great American Rail-Trail. Conversations with state agencies and local trail managers have convinced the organization that a nationwide bike trail is a realistic pursuit.

But if you're already planning your time off work and mentally packing your saddle bags, don't do so just yet. The scope of the project is so large that the Rails to Trails Conservancy says that it could take 20 years to complete, though smaller sections of the larger trail are expected to be added each year.

No matter how long it takes, cyclists agree that it will be worth the wait.

READ THIS NEXT: The 20 Greatest Cities for Cyclists