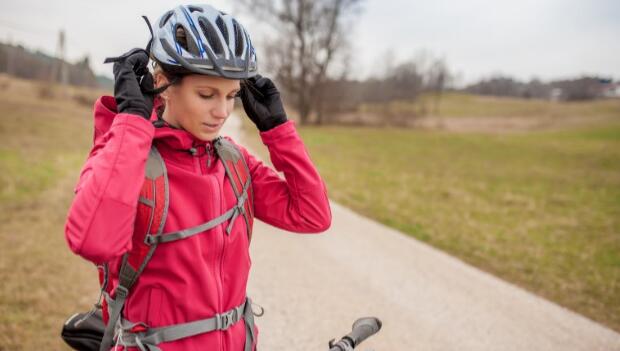 Paul Danhaus was feeling strong, well into his inaugural Race Across America.

The brutal cycling event is a non-stop, 3,000-mile journey from Oceanside, California to Annapolis, Maryland. Most solo riders get about an hour of sleep per day, then spend the rest of the time pedaling across the nation. The winners typically finish in about eight days.

Danhaus was about 1,000 miles into the 2009 race, rolling through the plains of Kansas, when he suddenly felt something weird.

"I just remember I was just having trouble keeping my head up," Danhaus said. "I was thinking 'Geez, I must be tired.' And then it dawned on me."

He may have been tired, but that wasn't why his head wasn't staying up. Instead, Danhaus was suffering from Shermer's Neck, a fascinating ailment that affects cyclists who ride unusually long distances.

To sum it up cleanly, Shermer's Neck is a condition where the neck muscles fail from fatigue and can no longer support the head. It is not a gradual ailment, either: after first feeling the symptoms, the neck will usually give out within two hours.

Danhaus had about an hour's notice before his neck stopped working. He still had about 2,000 miles left in the race.

The Race Across America started in 1982, when it was called the Great American Bike Race. Four cyclists raced from Santa Monica, California to New York City in the inaugural event.

One of those competitors was Michael Shermer. He finished the race in 1982 (though he didn't win) and tried it again in 1983. About 2,000 miles into the '83 race, Shermer suddenly was unable to hold his head up, and he was forced to prop his chin up with the palm of his hand to keep going.

A new medical condition—called "Shermer's Neck"—was named, and all it took was a 3,000-mile nonstop bike ride across the vast United States to discover it.

More: How to Prepare for an Ultra-Distance Event

It is a rare ailment for endurance athletes simply because most will never be on a bike for the 500-plus mile minimum it takes for Shermer's Neck to pop up. Even then, Shermer's Neck doesn't happen to most ultra-distance competitors. But it does frequently pop up among participants in both the Race Across America and Paris-Brest-Paris, a famous 1,200K brevet (745 miles) in France.

Though what exactly causes it isn't fully known, theories like posture on the bike have been discussed.

But just knowing the possibility of Shermer's Neck exists forces most ultra-distance cyclists to have a solution in place to deal with it.

"I had planned in case it would happen," Danhaus said, "but I sure did not think I would be affected with it. I never had any of those kinds of problems at all."

More: An Introduction to Randonneuring