Everything You Need to Know About the 2019 Tour de France 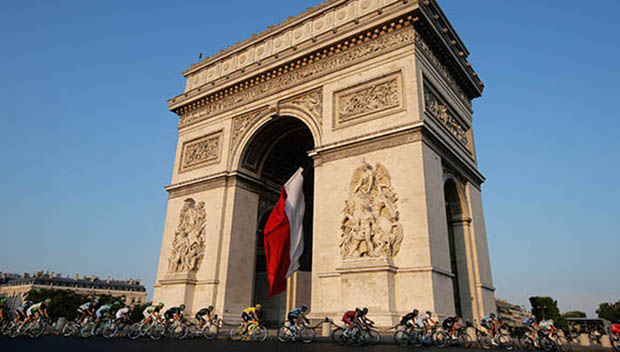 The 2019 Tour de France will be one to remember. Sure, we always say that (and it's always true), but throw the world's best cyclists on this year's route and fireworks are guaranteed—we promise.

With over 3.5 billion viewers tuning in during the span of this iconic three-week bike race, the Tour de France is one of the most watched sporting events in the world. It makes sense; who wouldn't enjoy a nearly 200-rider peloton attacking some of the most historic mountain pass climbs or sprinting down the Champs-Élysées?

Since we're in the United States, and the race is, well, in France, there's oftentimes a lack of coverage in the mainstream media. July will be here before we know it and with it, our favorite Grand Tour of the year. From how to watch the race to riders to keep an eye on, here's everything you need to know as we head into the 2019 Tour de France.

The 2019 Tour de France marks the 106th edition of the race, and this year the race will be celebrating the 100th anniversary of the maillot jaune—the yellow jersey worn by the race leader.

Released back in October last year, the riders will follow a seriously impressive route over the following three weeks. It's the highest Tour de France of all time, and three stages will top out over 2,000 meters.

More specifically, the race consists of two time trials (one team, one individual), seven flat stages for the sprinters, five hilly stages and seven mountain stages (five of which are mountain-top finishes). The Tour will wind through three Belgium regions and 37 departments of France over the course of 3,460 kilometers.

Don't want to miss any of the action? There are a few ways to (legally) watch the Tour.

First, you can gather your cycling buddies and head over to your local bike shop and watch the live feed. If you need any mid-race energy, they'll have plenty of gels available for purchase.

Next, you can purchase the NBC Sports Gold cycling pass (it will run you about $55), and you can stream each stage live or on demand with no commercials. This option is probably the most convenient, as it can be streamed through the app or the website at your convenience.

Third, a subscription to FuboTV ($55 a month) will give you access to NBC Sports so you can watch each stage live, as well as use the other channels in the package when bike racing isn't on.

And finally—and by now you know the drill—you can always set your alarm to catch at least the tail end of each stage on NBC Sports through your cable provider (or set your DVR to watch after work). Plus, NBC or its affiliate channels often run highlights of the day's stages during primetime each day.

As mentioned, this year's Tour features the highest elevation of any previous edition, so this is a Tour for the climbers. While each stage has its own notable characteristics, three climbing stages will really shake up the GC.

Stage 14 (Tarbes to Tourmalet Barèges): The summit finish atop the Col du Tourmalet will feature all the heavy hitters and will reveal who to watch for (and expose who's not in top form) as the race continues.

Stage 18 (Embrun to Valloire): This stage includes the Col de Vars, Col d'Izoard and Col du Galibier. At 207 kilometers in length with a 23-kilometer ascent to the finish, it will be a true test.

Stage 19 (Saint-Jean-De-Maurien to Tignes): Stage 19 is a short 123-kilometer stage that winds up the highest paved pass in the Alps, the Col de l'Iseran.

Notable Riders (in no particular order)

Froome was looking to tie Merckx, Indurain, Hinault and Anquetil (all have five wins) at this year's tour, but an unfortunate crash at the Dauphiné has left him recovering at the hospital with serious, potentially career-threatening injuries. The four-time winner won't be starting the race, and we wish him a speedy recovery.

Despite pulling out of the Dauphiné and undergoing surgery to remove gravel from his knee, Dumoulin is still slated to start the Tour. He crashed out of the Giro on Stage 4, so he's relatively fresh and is coming off a successful training camp in southern Spain.

He's been on the podium twice before and always seems to be a threat on the climbs—will the French see one of its own on the top step of the podium this year?

Team Ineos (formerly Team Sky) is still stacked—even without Froome—so expect a serious campaign from last year's surprise winner, Gerant Thomas. With Froome out, he's secured the role as the team leader and will be supported by his powerhouse cast of teammates, which includes Egan Bernal (who may be the one to step up if Thomas falters).

MORE: The Most Underrated Riders in Tour de France History

After crashing out of the 2017 and 2019 Tours, Porte is healthy again and looking to prove himself. His team has had limited results as of late and has a questionable cast of riders surrounding him. But we know never to count out this Australian.

Quintana has been on the podium three times over the past few years and is no doubt looking to secure a title for himself. With Froome out and Thomas a wildcard, this may be his year to capitalize on the thinner GC field.

It's been over a year since Cav has won a professional race but keep an eye on the Manx Missile. He has accumulated 30 stage wins in the Tour over his illustrious career—will he add a few more in 2019 on his way to eclipsing Merckx's 34?

READ THIS NEXT: The Most Heart-Pounding Finishes in Tour de France History