Don't Be That Guy

...who half-wheels his training partners. If you want to continue to have training buddies, don't continually do things that are likely to annoy them. People have only so much patience for a half-wheeler. Unless the plan is for a competitive group ride, don't make it one.
? Instead, stick to the plan
If it's a recovery ride, relax and take it easy, and let your buddies do the same. If it's a long ride, do longer pulls if you want more. If it's an intensity ride, do your intervals full out, and do your rest periods fully as well; base your speed on what your body is up for, not what your buddy's is.

...who gets to the race right before the start.
? Instead, show up early
Get there with enough time to calmly register, pin your number, check your bike and warm up properly.

...who overcooks himself with mega-miles too early in the season. Great racing form is great—during the racing season. Going too hard, and doing too much intensity too soon could mean you're fried to a crisp by the time July rolls around.
? Instead, follow the tried-and-true rules of periodization
It's easy to let our legs replace our brains during those early spring days, when the motivation to shed the winter cobwebs is at its highest. But many others before us have already learned the lesson—gradually build into your season with adequate time for base miles. Don't know the word periodization? Go online right now and buy the Cyclist's Training Bible by Joe Friel before you do another ride. Therapy is a better place than the race
course to work out your anger
management issues.

...who yells at his spouse or better half.
Whether she's standing around in a sweltering feed zone in the middle of nowhere to give you a bottle, or just patiently waiting for you at the finish, the important thing is that she's there at all. She is not your soigneur, and you are not a pro.
? Instead, be grateful
Even if your better half drops a bottle in the feed zone or doesn't understand your over-caffeinated ravings in the parking lot, keep some perspective. It's best to act is if people are watching; they are.

...who rides through red lights.
Not only is it dangerous, but it's also against the law. Maybe you can get away with it when you're riding alone, but nothing angers motorists more than watching a group of cyclists jump past them at the lights when they are patiently waiting for them to change green.
? Instead, stop and wait
Even if the group goes ahead, you'll get in some extra training as you work to catch back on.

...who fiddles with bike set-up the night before.
Handlebars coming loose, shifting going south, seatpost slipping...these are but a few of the possible outcomes that could pop up during a race after a late-night mechanic session the evening prior.
? Instead, carefully check your bike well ahead of time
Don't wait until the night before to make sure everything is dialed. Make bike maintenance a regular part of your weekly routine. This way, most of the jobs will be minor, and you won't end up in some comical worst-case-scenario during the big event.

...who gets upset at people for being competitive at races.
We paid to pin these numbers on, Mr. "Chill Out, Why Don't You?" Guy.
? Instead, keep some perspective
Remember your sense of humor, courtesy and safety in races. It is just a bike race, after all. But you know what? It's also a freakin' bike race! Let's have fun. Let's race. That's why they painted a finish line.

...who finishes a spirited group ride by terrorizing small children and commuters on the multi-use path.
? Instead, use the last few miles to warm down
Enjoy a few minutes of easy riding while you flush out the nastiness from your muscles. Treat others on the path as people, not obstacles. Use the path to represent for your sport (and your team, club, gender, etc.).

...who pins a number on like a parachute.
In a road race, criterium or time trial, it's an aerodynamic hindrance and an actual detriment to your performance. In any event, though, it's just ugly.
? Instead, pin it flat like a pro
Start with eight safety pins and your jersey flat on the ground. Starting at the top of the number, pinch the number and fabric together, then poke the pin through the fold. This way the pin will hold the jersey flat since it goes through the paper and fabric twice. Following around the edge of the number, attach the rest of the pins. Pull the jersey on, and re-pin where necessary to keep the number flat. 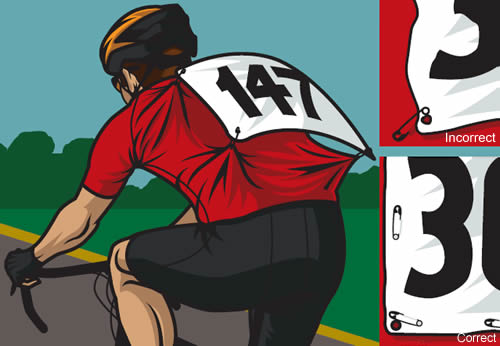 ...who takes care of ill-timed business at the front of the group.
Don't wait until you are at the front of the paceline to blow your nose, remove your arm warmers, fuss with your shift cable tension, dig food out of your rear pocket...You get the idea.
? Instead, act like the captain of the good ship Peloton
Keep the pace steady and the line smooth. Warn us of sand, glass and other nastiness. Take care of that other stuff when you are at the back.