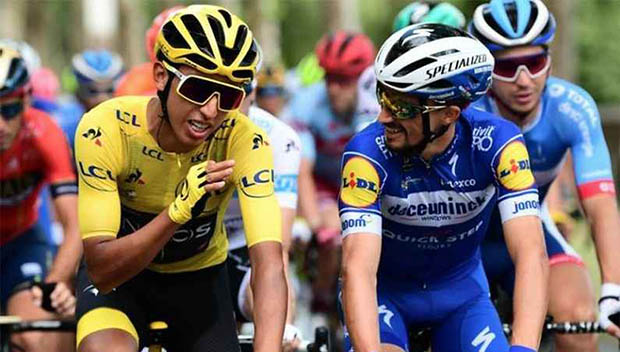 As far as cycling goes, 2019 was a year to remember. From controversial to inspiring, this season was chock-full of top moments (especially from the Americans) that left fans either shaking their fists or celebrating with both hands in the air.

We'd love to mention all the top storylines written by the world's best cyclists, but there are just too many miles to cover (see what we did there?) to mention them all.

From a first-time monument winner to a French resurgence in the Tour de France, we gathered 12 notable moments, in no particular order, to not only reflect on the 2019 season but look forward to the state of cycling in 2020.

A bright spot in a disappointing season for EF Education First, Italian Alberto Bettiol secured his first win as a professional cyclist in 2019, and it was a big one—the monumental Tour of Flanders. At the 1K marker the six year veteran was 20 seconds ahead of the chase group, and he held onto his lead for an emotional solo finish across the line.

Beginning with his amateur racing career and U23 accomplishments, 29-year-old American cyclist Taylor Phinney (son of Olympic cyclists Connie and Davis Phinney) has been a fan favorite with not just fans in the United States but supporters around the globe. After a season plagued by injury and poor results, Phinney announced on his Instagram that he's retiring to focus on artistic endeavors and reconnecting with cycling in a more casual and relaxed setting.

At just 22 years of age, Chloe Dygert Owen is quickly becoming one of the most decorated women in pro cycling. She's earned several gold medals from the UCI Track World Championships and a silver at the Olympic games, but this year, the young American became the youngest world time trial champion—ever. And it wasn't even close. She completed the 18-mile course over a minute and a half faster than her competitors, securing the rainbow stripes for the 2020 season (and she's now qualified for the Tokyo Olympics, too).

Rohan Dennis Abandons the Tour de France (and His Team)

Australian Rohan Dennis is no stranger to controversy, and 2019 proved no exception. Despite being only one stage away from the TT (his go-to discipline), he abandoned the Tour de France on Stage 12 with no explanation. After leaving the team, it was later released he wasn't happy with the gear used by Bahrain-Merida. It all worked out for Dennis—he ended up defending his World Championship time trial title and secured a contract with none other than Team INEOS.

American cyclist Alex Howes knows the U.S. professional national championship better than anyone—he finished in second in 2016, third in 2014 and fourth in 2015. He viewed 2019 as his last real shot, and luckily, on the roads of Nashville, it stuck. His last few kilometers didn't look promising as he was separated when Stephen Bassett bridged the gap to Neilsen Powless. Howes kept up the tempo, eventually rejoining the duo, and outpaced Bassett on the final corner to cross the finish line as national champion.

Arguably since the beginning of the sport itself, professional cycling has garnered a reputation of being not-so-consistent with the rules—often enforcing severe penalties for trivial actions or letting some pretty serious misconduct go unpunished. In this year's Tour of California, EF Education First's Tejay Van Garderen crashed outside of the 3K mark (riders who have crashed inside the 3K mark are given the same time as the peloton), but was awarded the same time as the field. This controversial decision put Van Garderen back in the yellow jersey, and many non-Americans weren't too happy about this ruling from the commissaries panel.

Landslides at the Tour de France

Compared to the Vuelta and the Giro, the Tour de France is generally milder weather-wise. But 2019 proved an exception, with unexpected storms and hot temperatures impacting several stages. With the yellow jersey very much still up for grabs, Stage 19 was touted as a deciding stage—and Egan Bernal made a fateful move up the Col d'Iseran to drop Thomas and Alaphilippe. While on the descent, riders were alerted the stage had been neutralized due to heavy rainfall and a landslide that covered the road several kilometers ahead. Alaphilippe was never given his opportunity to show off his unrivaled descending skills, and the podium was all but decided.

A Columbian Wins Tour de France For the First Time

Columbia is still celebrating its newest sporting hero, Egan Bernal, after his breakthrough win at this year's Tour de France. Bernal, the young rider with Team INEOS, became the first Columbian to win the Tour de France (despite promise from Nairo Quintana), and the youngest to win since Francois Faber—a mere 110 years ago. With Chris Froome out of the Tour due to injury, 2018 winner and teammate Geraint Thomas relinquished his position as co-leader to ride in support of Bernal, with the duo finishing 1-2 on the podium.

If there was one rider who deserved recognition for their year of accomplishments, Julian Alaphilippe tops the list. He won Milan-Sanremo (his first monument), La Flèche Wallonne, Strade Bianche, two stages in Tirreno-Adriatico and, of course, held the yellow jersey in the Tour de France for 14 days (and ended with a podium finish). What does 2020 look like for the Frenchman? He'll make his debut at the Tour of Flanders, although a Tour de France start is still questionable.

Women's cycling coverage has grown exponentially in the past few years, thanks in no small part to the abundance of exciting storylines, inspirational finishes and the depth of the field. Marianne Vos, the Marianne Vos, is one of the most dominant cyclists in her sport, and 2019 proved no exception. She was one of the original lobbyists for La Course (the women's Tour de France), and she has since collected two wins—one in Paris in 2014 and this year's race in Pau. She crushed the field in the last 150m, out-sprinting her rivals and crossing the finish line with her arms outstretched in well-deserved victory.

A favorite both with fans in the United States and the professional peloton, the Amgen Tour of California announced that it will be taking a hiatus after 14 years of racing. There was no explanation, but it leaves the status of professional cycling in the United States in a questionable predicament. Kristin Klein, president of the Amgen Tour of California, said "This new reality has forced us to re-evaluate our options, and we are actively assessing every aspect of our event to determine if there is a business model that will allow us to successfully relaunch the race in 2021."

Few teams in the history of cycling have had such a dominant season as Deceuninck-QuickStep. With 68 wins, including two monuments, its 2019 campaign was nothing short of impressive. Self-described as the "wolfpack," Alaphilippe bagged 12 wins and finished on the podium at the Tour de France, and a total of 16 different riders on the team came away with victories. While it could be argued Jumbo-Visma's 51 wins and Vuelta title is more impressive, it felt as though nothing could stop QuickStep in 2019.

READ THIS NEXT: The Best Social Media Posts From the 2019 Tour de France