Returning to exercise from a sedentary lifestyle takes will power 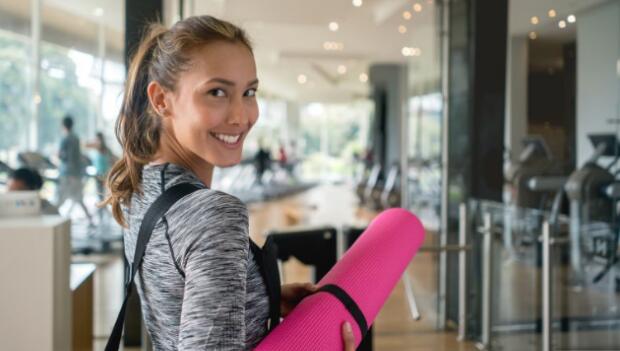 The day of reckoning comes to nearly all of us.

A favorite pair of jeans won't zip up; the idea of gardening is exhausting; a walk around the block is enough to send you to bed. Worse, you learn you have diabetes, suffer a stroke or find your weight is crushing your knees.

It's the day we realize the pounds are piling on, and we don't look good nor feel good anymore. It's a day we realize we need to exercise. However, many people still don't take action.

"What if your setbacks were also really blessings in disguise, signs not to abandon your goals, but to seek them in some different way?" Gerrish writes in his new book, When Working Out Isn't Working Out.

He advises identifying the hidden blocks that keep you sedentary. Overcome the physical and emotional blocks, and the problem will disappear, he reasons.

Shiavi Riley, a Detroit substitute teacher, didn't consciously approach a return to exercise with that in mind. However, her experience shows she addressed some hidden obstacles.

Riley, 35, returned to a twice-a-day walking regimen last month when her health and emotional lethargy hit an all-time low.

"My thighs were rubbing together so often I had a big rash on my legs. My knees hurt," Riley says. "I talked with a friend, an avid cyclist, and she asked what kind of exercise I was doing. I told her nothing. She said the problem wouldn't go away by itself, likely it would get worse."

Riley had not exercised regularly for almost 10 years.

"After I had my daughter, I sunk into a depression," she says. "It never occurred to me there was a mind-body connection. The worse I felt about myself, the less I wanted to do any exercise. Instead, I ate anything that wasn't tied down. My favorite was Baker's Square lemon pie."

Her 9-year-old's daughter's words burned into her brain: "Mom, please don't eat all those sweets, I want you healthy," Riley recalls. She called her close friend, Karmeta Denson, 26, who was just as ready to shuck some pounds and move her muscles because all her clothes were tight.

Gerrish suggests working out with a buddy is one of the best ways to get back into fitness because walking or lifting weights with someone is less boring than doing so alone. A supportive friend who reinforces your exercise goals also is especially helpful if friends and relatives are ridiculing you, providing another emotional block.

And don't watch too much television, Gerrish warns, noting the screen is full of perfectly sculptured young bodies. Riley doubts she'll ever be thin; she just wants to get her blood pressure down to normal.

For many people, busy lifestyles seem insurmountable until something breaks us out of the rut.

Dotty Kenny of Farmington Hills began to make time for a four-day-a-week workout regimen three years ago after a rude awakening. She was reaching for a second piece of cake, when a fellow bridge player told her she had a fat behind.

"I'd spent most of my adult life caring for others my kids, my parents, my husband. I just didn't make time for myself," Kenny says, noting she had never exercised in her life. "I was frankly embarrassed by how I looked. The bridge player sent me to Beaumont, suggesting I make health a priority."

Kenny, 69, works out at the Beaumont gym for an hour, four days a week, with other people enrolled in the intensive diet and exercise program. She has lost 40 pounds and kept it off.

"I pass six other gyms on the way here," she says. "I can't see myself exercising in one of those places with mirrors all around and tiny women wearing thongs."

"Exercise doesn't have to be a formal, time-consuming program to reap rewards," says Martin Lillystone, exercise physiologist and supervisor of William Beaumont Hospital's Weight Control Center in Birmingham. He works with people 40 to 200 pounds overweight.

He hears people complain they don't have a full hour, they don't have the skill to work a lot of different machines. In a crunch, they could easily walk around the block, climb the stairs at home several times and park in the back section of the shopping mall instead of up front. Getting in the practice of exercise conditions the body for more strenuous activity. Lillystone says an optimal fitness routine burns 2,000 to 3,000 calories a week.

"The biggest cause of obesity these days is a sedentary lifestyle," he says. "People give me many reasons, but likely the cause is the technological advances that enable us to be sedentary."

Once people decide to change their lifestyles, they frequently are disappointed, wondering why they don't look like movie stars after a month of intensive effort.

"I tell people they have a good chance of gaining strength, reducing discomfort from arthritis and lowering their blood pressure," Lillystone says. "It may not show results on the outside, but they will feel better all over."

No single catalyst brings people in the door to the local gym, the outdoor park or weight loss center. Beaumont participants often say they returned to exercise because of diabetes, arthritis, hypertension, a lack of muscle tone and the desire to achieve a general sense of well-being.

"The reasons are individual," Lillystone notes. "Life jolts them, and they realize they have to start moving."

Love prompted Dave Baker of Macomb Township to buy a bicycle and join an eastside club that schedules rides nearly every night of the week. He had met a bicyclist and was enchanted with her stories of friends and camaraderie. He envied her zest for fitness; he didn't get anywhere near the same fitness rush from bowling and hefting beers with his buddies.

While the romance deflated after a few months, the love of bicycling propelled him to complete several 100-mile bike rides and plan his whole summer around cycling.

"The sport does wonders for your mind. You feel younger, more alive," says Baker, 55.

He had the good sense to consult with veteran cyclists about how to climb hills, maintain a pace on long rides and stretch after each workout.

Author Gerrish suggests poorly planned warm-ups, improper use of equipment, failure to vary the training routine, an obsession with burning calories and overtraining or undertraining can lead to injury or fatigue, thwarting the best effort to get fit.

"I wonder what people are thinking whenever I watch what they do in the gym," he observes. "I see them on steppers, or stair machines, hunched over, with butts in the air, stressing their back, neck, and wrists in a way that's bound to be causing them pain. ... I see people jumping on treadmills and bikes, without any warm-up at all, going like mad for a very short time and then just jumping right off."

It's easy to get help in getting back on track with exercise, Baker says.

"You look around the club for people who are winners, those who bike with skill and fluidity, and seek their help. Most people are glad to coach you, if you are willing to listen."

Lots of things create obstacles to getting fit. What stands in the way? Gerrish suggests that several factors create unidentified fitness obstacles that thwart our best efforts.