Everything Triathletes Need to Know About Group Rides 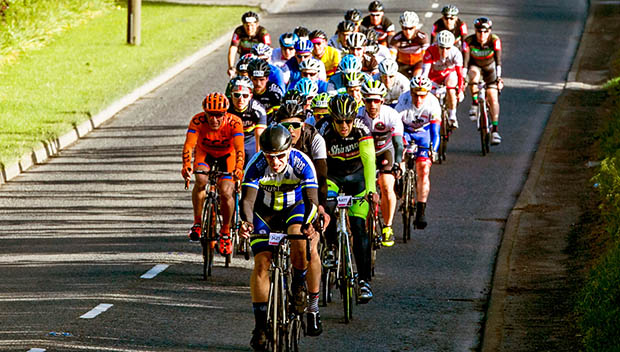 Group rides are social, fun and allow you to ride father and faster than when going solo. You'll also learn valuable bike handling skills that will translate well to race scenarios.

Don't show up with a tri bike for a group ride. To be safe, you'll need your hands by your brakes, so you'll never be in your aero bars. And if anything unexpected happens in your group, the risk of serious injury is greatly increased when a tri bike is involved.

Don't just yell "hole." Also point to the left or right to indicate where the hazard is, not the direction to go to avoid it.

Learn proper cycling hand signals for group rides. You'll need to point out road hazards, indicate direction changes and when the group is slowing or stopping.

Stay Off the Brakes

Learn to use wind resistance to slow your speed instead of using your brakes for minor adjustments. Sit up tall or slide half a bike width to the outside of the paceline to slow yourself. If you have to use your brakes to moderate speed, use the rear one. This will help let cyclists behind you know you're slowing.

To take advantage of drafting, you'll want to have between 18 and 24 inches between your front wheel and the wheel ahead of you. If you're uncomfortable with this, it's OK to stay at the back of the group until you've had a chance to practice this bike skill. Let others know you'll be doing this, so they won't expect you to fall into the paceline formation.

A single, rotating paceline means you'll be moving in a counter-clockwise fashion, moving up on the right and dropping back on the left. When it's your turn to ride in the wind, take care not to accelerate off the front. Take a short pull, and share the work with the group.

It's OK to have extra spacing between you and the other riders while descending. This will allow for greater reaction time to avoid road hazards and allow for smooth braking.

READ THIS NEXT: Survive These 7 Sketchy Group Ride Situations