Why Overpronation Happens and What You Should Do About It 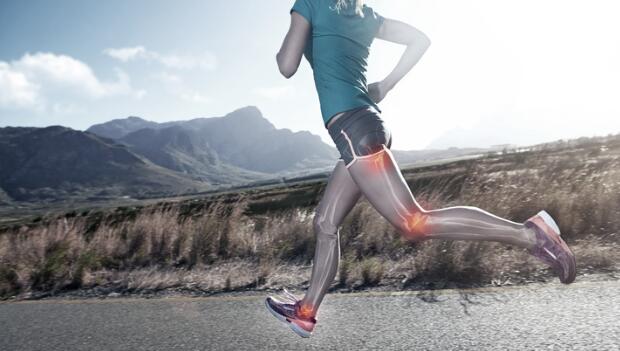 If you've been running long enough, you've most likely had to deal with various aches and pains in your feet, knees, hips or lower back. Plantar fasciitis, Achilles tendinitis, IT-band syndrome, meniscus tears, runner's knee, bursitis of the hip or knee, patellofermoral pain syndrome, chondromalacia patella, lower back pain and piriformis syndrome are only some of many conditions an athlete may develop during the course of his or her running career.

Although there are many factors that can contribute to the development of these conditions, improper biomechanics of the body plays a large and detrimental role in the process. Of the many biomechanical elements involved, foot and ankle function perhaps contribute the most to these aches and pains.

Pronation is the flattening of the arch when the foot lands on the ground. This flattening aids in balance and provides some shock absorption. As the foot flattens slightly, the ankle tilts inward toward the midline of the body, and the muscles of the lower leg help keep the ankle from rolling too far inward.

During a normal gait cycle, the forward movement is a result of the body's mass being displaced, putting the body in a forward-falling position. At this time, the lead foot hits the ground preventing the fall, followed by the rear leg as it swings forward, and the cycle repeats with each step.

Once the foot hits the ground its first function is to absorb and help dissipate the shock of impact. This is followed by pronation of the foot so that it can help accommodate the ground contour. The ankle goes into flexion allowing the knee to move forward, and the body follows. The heel raises, and the foot supinates becoming a rigid lever that aids in the pushing action that eventually ends with the toe-off.

Many other intricate and complex components of motion mechanics take place during this process, but for the purpose of this article, this helps to explain the basics.

Folks with flatter feet tend to have highly flexible arches, which are more likely to flatten too much. This is known as overpronation. In this case, the foot provides plenty of its own cushioning but does not retain enough of its own structure, so other parts of the leg, such as the medial tibialis (the "shin splint" muscle) and the knee, try to pick up the job of providing support. They aren't designed for this, and when they are overworked, they send pain signals indicating they can't keep doing the extra labor.

Conversely, people with high arches often have inflexible feet which limit the amount of natural motion the foot undergoes as it lands. These people don't get much natural shock absorption in the foot, and the ground forces will once again travel farther up the leg looking for a place to be absorbed, often in the shins, knees or elsewhere. However, not everyone with flat feet overpronate, and those with high arches may also experience excessive inward ankle rolling due to instability in the muscles of the lower leg.

Just as the structure of the foot can contribute to overpronation, so can poor stride mechanics. Heel striking, leading with your legs, a slow/long stride, or pushing off with the toes can cause excessive motion in the foot.

I've see a lot of runners who've been told that their particular condition is a result of overpronation. Usually, they've had some form of a "postural or gait analysis" done by a coach, trainer or healthcare professional, or at a running store. They are typically fitted with stability shoes, off-the-shelf orthotics or costume-made orthotics; the general intention being to prevent excessive pronation of the foot.

Although this is needed in some cases, it should not be done in each and every case when a runner's foot seems to over pronate. Doing so can and often does result in one symptom going away and another, usually a more complicated one, developing elsewhere.

Foot pronation (turning downward or inward) and supination (turning upward or outward) are normal and needed movements for proper function during the gait cycle.

The following is a brief and simplified reasoning as to why this practice may be flawed if a proper evaluation has not been performed prior to modifying shoes or using orthotics.

In a normal functioning ankle and foot there should be 15- to 20-degrees of ankle dorsiflexion present (leg moving forward on top of the foot; or, same as the foot bending backward toward the leg) as well as 60- to 65-degrees of first toe extension (bending backward).

Foot pronation (turning downward or inward) and supination (turning upward or outward) are normal and needed movements for proper function during the gait cycle. All feet must do this and do it well to minimize the forces that the body has to deal with during walking or running, and also to create the lever that is needed for propulsion.

It is the "excessive pronation" that has been considered a great offender in many of the above referenced conditions. This is when the foot remains in pronation for a longer than normal period of time. This also is what most people try to correct, and often do so improperly.

How many of you have gone to your favorite therapist, doctor or shoe store complaining of some sort of pain? You got a cursory evaluation; were fitted with shoes or orthotics and found that indeed your complaint(s) resolved; but only to find yourself complaining of something else hurting you a few weeks later without having changed anything else in your training.