The Rookie Runner: Completing Your First Half Marathon 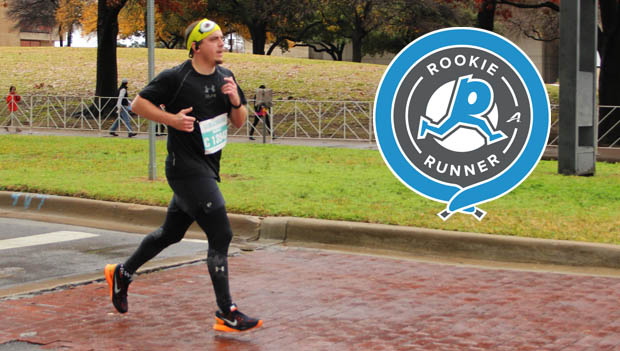 Active.com Senior Editor Scott Brown just completed his first half marathon. Get caught up on The Rookie Runner series.

No one told me it was going to feel like this.

It's been a little over 24 hours since I finished my first half marathon, and my ankles feel like they might shatter at any second and I'm pretty sure my knees have lockjaw. 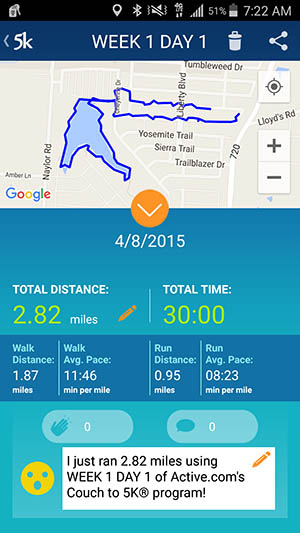 Between my level of soreness and the winter weather that's about to (eventually?) hit Dallas, there's a more-than-50-percent chance I won't work out again until March.

In spite of how decrepit and whiny I feel today, I have to admit I'm pretty amazed I actually did it. I started the Couch to 5K ® program on April 8 and was terrified it was going to make me jog for five minutes straight after just a few weeks of training. Eight months later, I completed my first half marathon in 2:01:40. Here's what I remember.

After I signed up for the half marathon, three of my coworkers decided to sign up, too. (Thanks a lot guys. We could've signed up for the relay and saved ourselves about eight miles each, but whatever.) My boss offered to be my pacer (no pressure!) and the triathlon and running editors got in on the fun.

I ended up missing the train by about 30 seconds and the next one was leaving 30 minutes later, so I decided to just drive. I'm a suburbs kid, so driving in the city stresses me out. Plus it was dark and raining, so this added a lot of unnecessary stress to my morning.

But I ended up getting there with time to spare and everything was fine. I ate my breakfast bar, stretched a little, hit the port-o-potty, got to our corral, and downed my energy chews before the air horn went off.

I felt pretty good for most of the race. I didn't push myself too hard early on, and the rain let up so the weather was actually perfect. My wife and her family came out to cheer me on with signs and everything that goes along with spectating, which gave me a good boost when I saw them at mile four. Apparently, after that I went into super focus mode, because I didn't see them again at mile seven, nine or the finish line, but they have the pictures of me to prove they were there (sorry guys, appreciate the support!).

Everything was going great until somewhere around mile 11, when I hit that wall I've heard so much about. The longest I had run in my training was 11 miles and that had been nearly a month ago, so I was not prepared for this feeling.

It wasn't a matter of wanting to quit; I just wanted to walk. SO. BAD! But I pushed through it and kept on churning. Once the finish line was in sight (it was downhill—that helped), I broke into a full sprint. I probably looked like an insane person because I was breathing like I was giving birth, but I wanted to be done with that race more than I've ever wanted anything.

I ate a banana. I hate bananas, but I downed that thing. I got my finisher's medal, took some pictures with my coworkers and drank three chocolate milks, which was awesome. 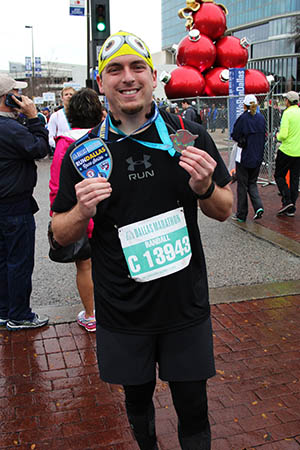 As you probably don't recall, I was running the half marathon as the final race in the Run Dallas Race Series so I could get a special medal. Well, when I went to collect my winnings, guess whose name wasn't on the list? The volunteer said I'd have to call the Dallas Marathon people the next day to work it out.

"Listen lady, I've been working toward this for eight months and I just spent two hours murdering my knees! NOW GIVE ME MY SPECIAL PRIZE," I screamed in my head. Meanwhile, in the real world, I politely pulled up my registration confirmations for each race on my phone and the volunteer gave me my absurdly large medal. Let the record show I wish her no ill will.

I had a giant bacon cheeseburger for lunch, went home and drank as much eggnog as possible (because running a half marathon gives you a blank check on what you can eat and drink...right?), and went into recovery mode. I iced my knees, massaged my legs and even took an Epsom salt bath. I don't think it helped.

The Worst Part of the Experience

It seriously hurts so much. Every step is a chore. I feel like my legs have aged 50 years. It probably wouldn't be so bad if I had stuck to my training plan, but I'm lazy and don't like running in the dark, so I dropped off a bit toward the end.

I know I won't be sore forever, but right now, I hate running. Stupid lactic acid.

The Best Part of this Experience

I can run for more than 30 seconds at a time now, which has been proven to have real-world benefits (besides being healthier and such). For instance, if I see my train pulling up to the station a couple hundred yards away when I leave work, I can now cut through the alley and book it to the next station before the train gets there. Always makes me feel like a badass.

In other train-related running benefits, one day a kid snatched my phone out of my hand and bolted off the train. True story. I had already completed Couch to 5K at this point, so I took off after him (NOTE: The Active Network does NOT condone chasing train thieves). I gave pursuit for about three blocks (mostly uphill, I might add) before he gave up and dropped the phone.

I recovered my phone with no damage done and the guy ran about 50 more feet to get away before he had to stop to catch his breath. I was totally winded at that point too, but still felt like Batman. So running can be cool!

So that's it, I'm no longer a rookie runner. Now the only question is, what should I take on next?

Cast your vote in the poll below to let me know what you think I should train for in 2016. I'm not saying I'll honor the results of the poll, but it may influence my decision.