Here's How Slow Your Easy Runs Should Really Be 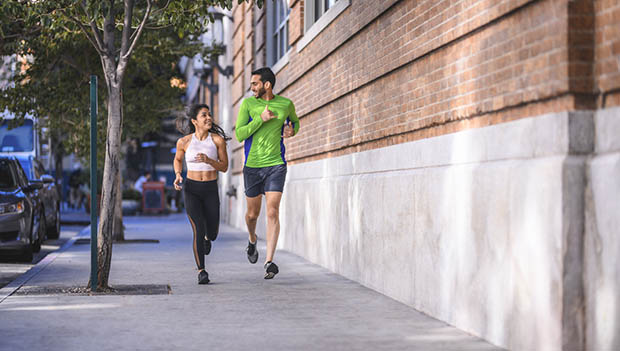 Whether you're training for your first marathon or your fifth, you're likely familiar with the concept of doing the majority of your miles at a slow easy pace. However, many runners have a hard time slowing down sufficiently for their long and easy runs, because pushing the pace seemingly comes naturally. But just because you can push harder than a true easy pace doesn't mean you always should.

According to Rebekah Mayer, a USA Track & Field Level 2 certified endurance coach and national training manager at Life Time Run, when it comes to your long runs and general easy runs, what your pace should be depends on what your goal race pace is.

"If you can finish a marathon in close to three hours or faster, for example, you're typically racing at a much higher percentage of your max than somebody who might be running that marathon in five or six hours," she says. "Because of that, we have to create more variation from race pace to easy pace for runners of such different levels."

Many marathoners on the three-hour end of the spectrum may have to slow down by at least 60 to 90 seconds per mile for their easy runs with some recovery runs having a pace of two minutes or slower than their race pace—and sometimes significantly more than that, Mayer says, who is a 2:59 marathoner herself but does her easy runs around 8:00 to 8:30 pace, compared to the 6:50 she averages on race day.

"If you take a look at what professional runners are doing, you'll see that unless they're doing a goal-pace run or structured workout, they also have a pretty significant difference compared to their race pace because it's still a challenge for them to go out at that pace for a long period of time," she says. "Additionally, many elite Kenyan runners have shown to have a really big discrepancy between easy jogs and fast paces because they know they have to recover really well because they do such high intensity work on those fast days."

But for a six-hour marathoner, their challenge in the race isn't so much maintaining a super high intensity, it's just finishing that duration at a pace that's moderately stressful, Mayer says. As such, the difference between their race pace and long run pace may only be about 30 seconds per mile.

"The general idea is that the fastest marathoners should have the widest range between marathon pace and easy runs; that pace differential decreases as marathon finishing times increase," she says. "For a runner in the 3:30 to 4:30 finishing range training by pace, I would suggest starting with an easy run pace of 45 seconds to 1:15 slower per mile than race pace and adjusting that based on heart rate, perceived exertion and/or weather conditions as necessary."

But more important than focusing on numbers is the ability to carry a fluid conversation while running easy, Mayer says. This is a good indicator that your body will be able to easily recover from the hard workouts you're doing.

Mayer even agrees that, generally speaking, it's not possible to train too slowly for those regular easy runs so long as you're mindful about your gait and efficiency. Unless you're pounding the ground because you're going so slow that it's awkward for you, there's not really a risk of going too slow from a cardiovascular standpoint, she says. Running too fast on what should be easy days, however, reduces your ability to recover.

"You'll probably start hitting slower paces across the board because you're not able to hit those hard workouts as fast you should, and your body needs that balance of stress and rest for your easy runs," she says. "Those easy runs are kind of an in-between in that they're not a total rest day, but they're not supposed to be a high stress day either. So if we add too much stress to that side of the balance, then it can increase the risk of injury or getting sick."

When it comes to actually practicing race pace, Mayer actually doesn't have her runners practice marathon pace at heavier volume chunks until their last two months or so of their training season, instead focusing on what she considers to be more impactful speed sessions earlier on in their training. When she does have them focus on marathon pace, she typically assigns six to 12 miles of a long run at marathon pace or sometimes in shorter weekly runs with hills if their race will have a hilly course.

"In being able to stretch out your total volume of running—whether you measure that by time or distance—those lower intensity runs help you to build more endurance and that increased oxygen-carrying capacity," she says. "Adding more time spent on your feet also helps to strengthen your bones, tendons and ligaments so that you can support that increased load as you're building."

Finally, another part of the equation that runners are looking for in easy runs or long runs is in terms of the fuel burned, Mayer says.

"Part of doing those slower runs is that it teaches our bodies to burn fat, which is really important in a marathon because our carbohydrate stores only last so long," she says. "So the more efficient we are burning fat, the more we can push off hitting the wall."

READ THIS NEXT: 8 Sneaky Ways to Make Your Next Run Feel Easier